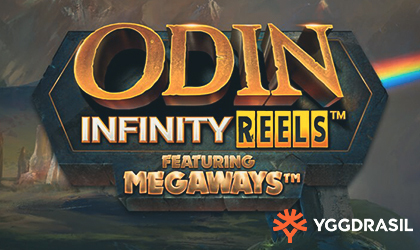 Odin Infinity Reels Megaways is a new online slot created in partnership between Yggdrasil Gaming and ReelPlay. This title will be one of the most notable launches in the next few months. Here, players are invited to visit one of the Northern Kingdoms, as seen in the background image, and experience an exciting mechanic that includes endless Infinity Reels, as well as unlimited megaways.

In this title, players will start with 3 reels, but thanks to the Infinity Reels engine players can add unlimited reels as long as prizes keep coming in. But that’s not all; the maximum potential win is 20,000x the bet, and the RTP is 96.20%. As for the bonus features, there are Valknut Wild, Gungnir Scatter, extra spins, and multipliers. The betting range starts at $0.30 while the maximum betting option is $12.

A Fantastic Partnership with ReelPlay:

Stuart McCarthy, Yggdrasil’s Head of Partner Programs, said: “The YG Masters program was designed to facilitate leading products from some of the most innovative studios in the industry, and this latest game ticks every box."

More on the Swedish Provider:

Yggdrasil is an online casino provider that revolutionaries the world of gambling. The company was established in 2013, with its first license, and at that time, it was an underdog in the industry, but over the years, it rapidly increased its reputation. Subsequently, in 2014, the provider released the iSense platform, which allows new versions of games to be fully adjusted on mobile and desktop devices. In 2015, the team developed the Boost promotion tool, and later the following year introduced the social media tool Brag, which allows players to celebrate important wins with friends. It launched many popular games such as Casino Zeppelin, Golden Fish Tank, Legend of White Snake, and more. The company was recognized for its success and they received an award for Innovator of the Year in 2019, 2018, and 2017 at the International Gaming Awards.