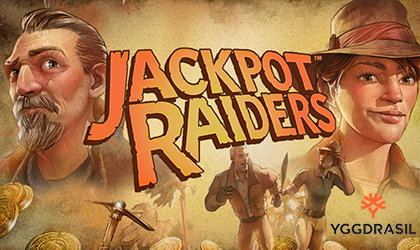 Oh, what a promising and tempting title this video slot is…

… and it’s no wonder when it has one of the most creative software providers in the industry behind it. This title surely looks like it has a lot to offer, so let’s check it out together!

Don’t Be Afraid To Explore!

The game is called, Jackpot Raiders, and it stands for an adventure during which players will get the chance to experience something stirring and enticing every single second! The main goal of this virtual journey is to find treasure that can be found in many places.

What is especially good about this virtual journey is the fact that it is so dynamic and interesting, that gamers will quickly come to the realization that no two gaming sessions are similar. Moreover, they will all be tempted with various choices!

One of them is Bear who is very intelligent and resourceful, while the other one is called, Sam, and he possess courage like no one else, as well as unbreakable will to accomplish something. Of course, the thing that motivates them to move forward is the widely-known, Sunken City, where treasure is lurking behind every corner.

How To Decide Which One Is Better:

Yes, it surely is a difficult choice, because both of them are very beneficial, however, there are some things that must be considered. First of all, Sam bestows players with more valuable rewards, if she manages to make it across the river and grab the treasure chest filled with sensational prizes.

On the other hand, Bear may not be as lucrative as Sam but it is easier to overcome his challenges and end your journey with great (still, less valuable) prizes. During this game, players will have a plethora of opportunities to snatch excellent jackpot prizes, as well as slot spins within the base game.

But That’s Not All…

Ultimately, they will also be able to seize a lot of money by grabbing precious gems during the extra spin round. Jonas Strandman, Senior Product Strategist at Yggdrasil, stated:

“This is the ultimate game for jackpot hunters! The smaller jackpots will drop left and right, and the biggest jackpot will grow BIG. The bonus game will keep the players’ balance floating, and collections guarantee a fair jackpot chance even for the unluckiest players.”

Just like with all their games (such as Wolf Hunters, Trolls Bridge, Dr. Fortuno and many others) this video slot is equipped with their collection of in-game promotional tools, BOOST.