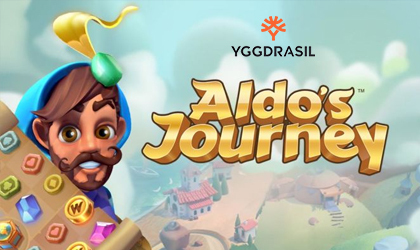 Yggdrasil has announced the release of a new slot game titled, Aldo’s Journey. The game features all kinds of cool mechanic that…

…can potentially bring valuable rewards to those who are lucky enough to draw them. The game is all about a thrilling experience packaged into awesome visuals.

Navigating the Map for Treasures:

The supplier is very well known for its prowess when it comes to graphics. Slot games designed by this studio or any of its 3rd party partners, simply recognize the value of solid graphics and offer nothing less. This latest release is the perfect example of the company’s policy. Right off the bat, players are greeted with a pretty unusual setup. The game…

…sits on top of a small village located near a beach. The most interesting thing here is the perspective that is very similar to that of RTS/RPG games. It’s almost isometric, thus giving this slot the vibe of old school…

…RPGs. With that said, the background is highly animated. There are leaves blowing in the wind along with the treetops they came from on one end. On the other end of the map, players will see a coastal town with a few boats anchored just off the coast.

The level of animation makes this entire game feel very interactive. Symbols come in the form of all kinds of valuable stones and jewels, making that aspect of the visual experience pretty simple.

Where this slot truly excels is the actual core game side of the package. Namely, it features a 5x5 reel grid that is divided into quadrants and runs on 72 fixed paylines. There is also Aldo, who is acting as a permanent wild…

…and skips all over the reels on every spin. Aldo’s always present, meaning that players will have larger chances of hitting a decent win. Special features include….

…various bonus spin modes that are named after popular tourist destinations such as Italy, China, Mongolia and others. Overall, the game is quite exciting.

Natalya Ovchinnikova, Product Owner Slots at Yggdrasil, commented on the new release: “We can’t wait to take Yggdrasil fans on this fun-filled journey around the world together with our adventurous merchant Aldo. While traveling through the game as they hunt for gold, players will find themselves in wonderous lands from Italy and China to Persia and Mongolia. Aldo’s Journey has fantastic graphics and is packed with fun features to keep players entertained and engaged, including Free Spin Symbols, bonus combinations and Journey Wilds.”

Yggdrasil is one of the largest software providers in the Nordics region. The company has been around for 6 years as it was founded in 2013. Since then, it has managed to become one of the highest quality providers in the industry, offering exquisite slots to various operators.