Yggdrasil Releases Valley of the Gods 2 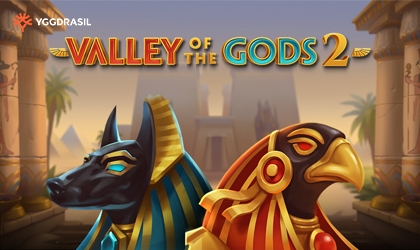 According to the provider, the game is suitable for all kinds of punters, including the more demanding ones. The slot offers a new feature- Collectible Wilds- for achieving great wins.

The adventure takes place in the lost desert landscape of ancient Egyptian civilization. The slot takes a minimum bet of $0.1, while the maximum bet is $100. This is a medium-high volatility game with a maximum win up to 5,481x the bet. The RTP for the title is set at 96.3 %.

The game is all about crazy chain reactions, and when the reels of the video slot are fully extended, there are 20,160 active paylines. The punter task is to destroy Scarab symbol blockers, which happens with every win aside from creating respins. When you destroy all blockers, you activate extra features such as Wild Reels, Extra Lives and Win Multipliers.

This is another fine release by the brand, and fans of the original title will not be disappointed.

“Valley of the Gods became an instant classic from its simple but deep gameplay and thrilling re-spin rounds. The sequel has everything we loved from the original and more. Packed with plenty of modifiers, Valley of the Gods 2 can turn any spin into a huge win up to 5481 times the bet for our fans across the globe. The new wild reel feature shows up on a regular basis and can give huge win combinations and combining it with a multiplier is marvellous. We are confident our partners and their players will love the game.”

Yggdrasil was established in 2012, and since then, has evolved into one of the most respected providers in the online casino industry. According to the company, all games are made with a primal focus to players who deeply understand the mechanic and features of slot games.

The software has a continuous creative approach and growing its portfolio of products is its core goal of gaining an international market.

It has licenses in Romania, Malta, Italy, Gibraltar, Romania, and the United Kingdom to broadcast gaming platforms and products to European markets.