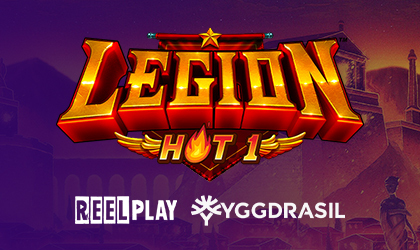 Players are invited to fight as part of one of the greatest armies of Ancient Rome in this new Yggdrasil slot Legion Hot 1. This is a story about a Roman legion and brave soldiers, where the background is filled with a green landscape full of vegetation and a beautiful view of mountains in the distance. The reels are associated with the war and include a Legion soldier, which represents a wild symbol, bonus shields, gold coins, Roman eagles, lions, deer heads, helmets, axes and lower-paying symbols J, Q, K, and A.

Legion Hot 1 has 5 reels, 3 rows, and a starting 243 active paylines. Since the play area can be expanded to the middle of the third reel area, there can be up to 1125 active paylines. This is a low volatility game, where a maximum potential win is 2,525x the bet, while the RTP is 96.37%. As for the bonus features, there are extra spins, multipliers and reel expansions. The minimum betting option is $0.3, while the maximum betting option is $90.

The game builds excitement via a tense battle during the extra spins, where players can fight for big payouts with the help of the Ancient Roman army!

Stuart McCarthy, Yggdrasil’s Head of Product and Programs, said: “Legion – Hot 1 transports players back to Rome’s glory days where the brave legionaries fight to protect the Empire. ReelPlay and their partner studios are rapidly creating and releasing premium content via the YG Masters program and their games have been huge hits with players so far. I expect Hot Rise Games’ Legion – Hot 1™ to continue that trend.”

Yggdrasil is a game provider specializing in creating amazing content for online casino providers. This company has had a big impact on the iGaming industry and its growth, especially with creating innovative, immersive, and entertaining slots. This brand offers exceptional and innovative online gaming solutions to gambling operators around the world. Its gaming portfolio continues to grow, and it is among the most recognized and respected providers in the industry. This provider was founded in 2013 and has supplied gaming products to some of the largest online casino studios in the world over the years. Its work has been honored and in 2018 it received the EGR B2B award for innovation and in 2017 it was named Supplier and Innovator of the Year.