Yggdrasil Declares War on Fireflies with the Release of Multifly 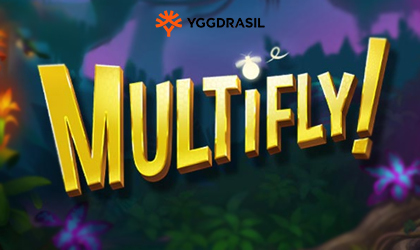 Yggdrasil is continuing to release innovative and entertaining slot games in the 3rd month of 2020. The latest addition to their portfolio comes in the form of Multifly!

This brand-new slot brings exotic animals to the reels, but most importantly, a whole variety of multipliers that can potentially yield massive rewards.

The slot takes place deep inside a jungle. The entire theme is centered around exotic animals and a sensation of untouched nature. As expected, this is best seen in the background image.

…this slot placed the setting within a thick canopy part of the jungle. With very little sunlight making its way through the leaves, the entire scenery has a dark blue aesthetic to it.

The details closest to the reels are animated. Players will see flowers and branches slowly swaying in the wind. Another part of the theme that is animated is the 5 chameleons sitting on top of the reels.

Symbol design is all about the exotic animals of the jungle. Players will see a variety of lizards, parrots, and frogs in the higher paying deck. The lower paying deck comes in the form of colorful card royals, which work great with the rest of the theme.

Last but not least, there’s the lively soundtrack that adds to the overall immersion of the game.

The 5x3 grid slot requires players to land one or more identical symbols in three consecutive reels in order to win. However, landing more than one symbol on any reel will multiply the win.

…core game itself is quite interesting, the fun truly begins when you dig into special features. For starters, after every win in the base game, all of the winning symbols are removed and an extra wild is added. Then, new symbols fill the empty space.

Next up are the reel multipliers. There are 5 chameleons sitting patiently on top of the reels that snatch wild symbols as they land. Doing so increases the multiplier value for each reel. Once you land a winning spin one of the reels packed with multipliers, your winnings are multiplied accordingly. Last but not least, we have the bonus spin mode that carries over the multipliers collected during the base game.

Jonas Strandman, Yggdrasil Senior Product Strategist, said: “The MultiMAX feature is maxed out in this game! Blaze through the spins and see Multipliers merge and multiply with each other for unbelievable wins. The indefinite increasing multiplier in the free spins mode is a familiar feature, but you have never seen it grow out of control this fast!”

Yggdrasil is one of the largest software providers from the Nordic region. Dedicated to creating new and exciting games, this company is all about the end user’s experience. Over the years, the developer has provided the iGaming industry with several innovative technologies, thus boosting its reputation of an industry authority.