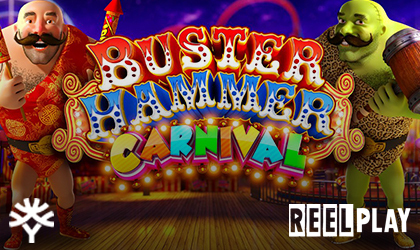 Yggdrasil has developed with ReelPlay a slot Buster Hammer Carnival and invites players to join the party. This is the fifth release from the two brands together and comes after the recently launched El Dorado Infinity Reels. This title was created using Yggdrasil's GATI technology, allowing its collaborating partner to use standardized, pre-configured and regulatory-ready development tools to create great content.

The game comes with a big grid of 5 reels, 5 rows and 32,768 active paylines while the background is filled with a vibrant and lively Carnival atmosphere. The animated ReelPlay character Buster is bigger than ever and is waiting at the reels, ready to test his power by crushing the High Striker if the Wild symbol Hammer lands. Wild golden hammers can appear on each reel and generate huge payouts with expanding wilds. It’s a medium to high volatility title with an RTP of 96.30%, where the betting range goes from $1 up to $25 per bet.

The title was launched under the YG Masters program and it’s another exciting slot full of fun features and both companies are satisfied and will continue successful collaboration in the future!

Stuart McCarthy, Head of Partner Programs at Yggdrasil, commented: “Buster Hammer Carnival is another fantastic addition to our YG Masters offering, combining the action of a thrilling slot with all the fun of the fair. ReelPlay has consistently delivered engaging content through the program and we’re looking forward to the continued relationship.”

David Johnson, CCO at ReelPlay, added: “As part of the YG Masters initiative we’re able to rapidly scale up our roadmap and unveil games to new partners with regularity and consistent success. We’re very fond of Buster and had some fun with his animations in this title where we extended his cheeky character. On top of this, all the key elements ReelPlay are known for are firmly there and we’re excited to see how Buster Hammer Carnival is received by players accessing the game via Yggdrasil’s operator partners.”

Yggdrasil, the world's leading provider of iGaming content, offers epic and interesting casino content. The company was established in 2013, and with its first license, accomplished a lot in just a few years. Already in 2014, the provider created the iSense platform, which allows for the complete customization of new versions of games on mobile and desktop devices. They have been multiply awarded for the prestigious Innovator of the Year 2019, 2018 and 2017 at the International Gaming Awards.