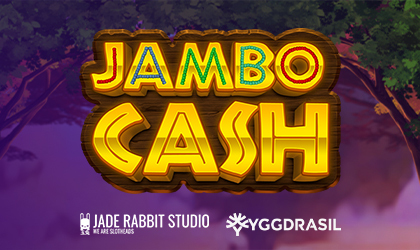 The Jambo Cash Hotel is located in the African savannah and the action takes place at dusk, in magnificent nature, and in the background is a beautiful sunset. Yggdrasil, with Jade Rabbit, have joined forces and created an online slot called Jambo Cash.

The game is played on 6 reels, 4 rows, and 4096 active paylines. The game features an RTP of 96.47%, which is above the industry average. Before pressing the spin button, players first need to choose a betting option between $0.1 and $200. The maximum potential win is 12056x the bet and the game is filled with bonus features including wilds, scatters, multipliers, mystery choice, and bonus rounds with extra spins.

Jambo Cash is the second game developed via the YG Masters program with Jade Rabbit development studio after Word of Thoth. The game is powered by industry-leading Yggdrasil technology, GATI, which allows development studios to use standardized development to create amazing content!

The name and logo of the online casino provider, Yggdrasil, is inspired by ancient Norse mythology. This brand offers exceptional and highly entertaining online games. It entered the iGaming market in 2013 with its first license and was not popular at the time in the industry, because it was very difficult to stand out quickly among other industry-leading brands. However, it achieved a lot in just a few years. Already in 2014, the provider significantly changed its market position with the iSense platform, which allows the complete customization of new versions of games on mobile and desktop devices. In 2015, it developed the Boost promotion tool, and the following year introduced its Brag social media tool, which players use to celebrate big wins with friends. The company has worked hard to build its reputation over the years and has been recognized for its innovative content and has also received the prestigious Innovator of the Year award in 2017, 2018, 2019, and 2020 at the International Gaming Awards.