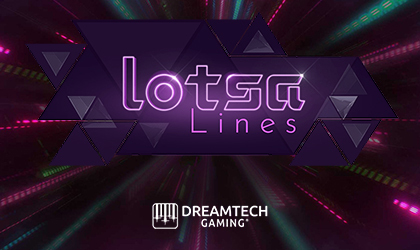 Powerful and futuristic vibes with an intense soundtrack come with the latest online slot developed by Yggdrasil Gaming and Dreamtech Gaming. Lotsa Lines is played across 5 reels, 5 rows, and up to 500 active paylines.

This title has an RTP of 96.09%. The maximum potential win is 3500x the bet. Speaking of wagering, players can place bets between $0.25 and $75, which is the maximum betting option. As for the symbols, there are 10 regular symbols, plus wilds and scatters. The symbols that are made up of 4 geometric shapes are premium symbols, while classic cards A, K, Q, J, 10, and 9 are lower-paying ones. As with most slots, at least 3 identical symbols are required to generate a win. Players will be looking mostly for Wilds as they replace any other symbol, plus they pay 20x the bet.

Yggdrasil's industry-leading technology, GATI, was used for this game, and this allows partners to use development tools to create great casino games that will be distributed and integrated rapidly!

Stuart McCarthy, Head of Product and Programs, said: “With its quick to learn gameplay this title will appeal to a wide variety of players taking them on a futuristic trip that offers huge win potential and a unique gaming experience.”

Halvor Dahl, Business Manager at Dreamtech Gaming, said: “Our latest smash-hit offers up to 500 paylines in the bonus round and, combined with the simple yet engaging gameplay and strong soundtrack, players can truly immerse themselves in the action of Lotsa Lines.”

The name and logo of the online casino provider, Yggdrasil, is inspired by ancient Norse mythology. This company offers outstanding and very interesting online games. It emerged on the iGaming scene in 2013 with its first license and has accomplished a lot in just a few years. In 2014, the provider made a great innovation with its iSense platform, which allows full customization of new versions of games on desktop and mobile devices too. In 2015, the team developed the Boost promotion tool, and the following year introduced the Brag social media tool that players use to celebrate important victories with friends. Over the years, the company has worked hard to build a reputation for itself and has been recognized for its innovative content and has also received the prestigious Innovator of the Year award in 2017, 2018, and 2019 at the International Gaming Awards.