Yggdrasil Adds Another Title to Joker Series with Lightning Joker 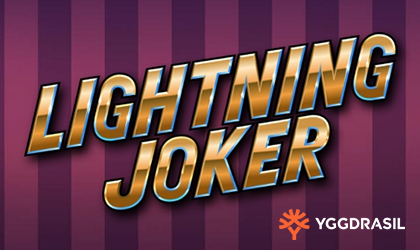 Yggdrasil, one of the largest software providers in the iGaming industry, has added another slot game title to its highly popular Joker Series.

…bringing cool visuals but more importantly a new feature that is promising to make this game extremely fun to play.

…a familiar theme that will appeal to all fans of classic slots. The supplier went with a simple background that offers a decent contrast to what is going on inside the reels, without taking away any of the focus.

…details that are easily seen against the purple background. As it is usually the case with classic slots, the most interesting stuff is found on the reels. Players can expect a truly classic experience complete with fruits, lucky 7s, and other symbols.

It’s worth mentioning that all of the symbols have that high detail look to them, making this a pleasurable visual experience.

Features that Make the Game:

It’s no secret that most classic slots offer a very limited selection of special features. However, that isn’t quite the case with this one.

This 3x3 slot offers the Rapid Respin feature that is…

This will trigger all kinds of multipliers up to x10. Then there’s the Mystery Win feature as well as the Wild feature.

Jonas Strandman, the Senior Product Strategist for the brand, said: “Lightning Joker is an electrifying and innovative addition to our slot portfolio, while also continuing our exciting and hugely successful Joker series of games. The simple and elegant yet fast gameplay, teamed with plenty of features, means players are in for a thrilling time as wins crash down and light up the reels.”

The Brand Behind the Game:

Yggdrasil is one of the leading software providers in the iGaming industry. The company was founded in 2013 and has since become a figure of authority among its peers. From day one this provider has been delivering innovative and highly successful games. Today, it offers a massive portfolio of slots while they also run a large network of 3rd party software providers who are delivering exclusive games for them.