Wild Robo Factory Hitting a Screen Near You via Yggdrasil 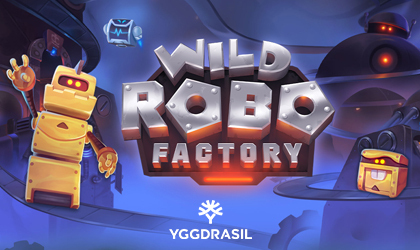 Yggdrasil has released the long-awaited Wild Robo Factory slot. With the new title out in circulation, this software provider is hoping to achieve the same level of success they’ve achieved with their other recent games. The studio behind this title is one of the more prominent studios in the industry that maintains a solid track record.

The game features a 4x5 grid and 25 paylines. The theme is set in what appears to be a robot factory. This developer is particularly known for delivering dynamic themes and engaging backgrounds, but this latest title presents the user with an unusually high level of graphic details.

Visuals help tell the story and keep the player engaged. As the title of the game states, robots are at the very center of the theme. The new video slot brings a number of interesting mechanics which include 12 different robot wilds. They bring an entire array of useful features, including multipliers and other bonuses that have the potential to help the player.

Aside from high-quality graphics, the studio behind this title has come up with a number of unique game mechanics and promotional features aimed at improving the player’s overall experience.

This move will arguably improve the industry’s perception of the game in the following days. Jonas Strandman, Senior Product Strategist at Yggdrasil, offers a further explanation on this subject:

“Wild Robo Factory is a highly original addition to our portfolio, packed with unique features and game mechanics. The Free Spins have some serious win potential if you get big robots, system overloads or re-triggers. As with all Yggdrasil slot titles, Wild Robo Factory comes complete with our collection of in-game promotional tools, BOOST®, and we look forward to seeing how it is received by our partners.”

Their BOOST promotional package is known for positive results, especially in the period right after the launch of a new game. A similar thing happened with Tut’s Twister – another great game from this provider.

This concept includes a number of unique features such as missions, prize drops, and in-game tournaments.

Back when BOOST was first implemented, Yggdrasil’s CEO, Frederik Elmqvist, was right in determining that gamification will play a crucial role in this studio’s future strategy.

This package of promotional features has proven to be one of the best acquisition and retention tools in the industry. Despite a few attempts at creating something similar, BOOST remains the leading platform of its kind on the market.

Since they were founded in 2013, this company has grown to become one of the most respected and trusted software studios in the industry. They’ve achieved such a high reputation by constantly being on the cutting edge of game design.

Their releases are packed with unique features, which have helped this company grow quite a large following over the years. Since they are showing no signs of slowing down, it is reasonable to say that the developer is going to remain one of the leading authorities in the business.