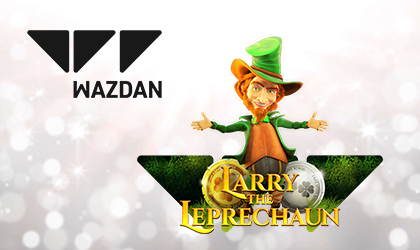 Wazdan Games has been hyping up the release of its Larry the Leprechaun slot ever since it was first announced, not so long ago. The game rumored to be their most important release for this year, making it the star of their current lineup.

Larry the Leprechaun has come out right in time for iGB Live! event where Wazdan plans on pushing this game to front and center of their stand.

Not Your Ordinary Slot Game:

Larry the Leprechaun is a slot game that takes the player deep into the forest where potential awards await behind every corner! Just like in the old Irish legend, this leprechaun is likely to bring you a pot of gold if you’re lucky enough. The demo itself reveals why there was so much hype surrounding this title.

The studio behind this game went above and beyond in terms of graphics and base game mechanics. The theme features a deep forest scene with vivid greens and a fully animated Larry who reacts to everything that is going on on the reels. Awesome visuals are only complemented by an equally detailed soundtrack and sFX setup. The end result is a captivating atmosphere that pulls the player in and keeps them entertained.

The demo that is live right now on the manufacturer’s website tells an interesting story in terms of base game mechanics. There are no paylines in the usual sense of the word, but instead, the symbols pay no matter where they are on the 4x4 grid. Special features take the whole thing even further.

The player is tasked with collecting 16 gold and an equal amount of silver coins. Former will trigger 16 extra spins with locking wilds, while the latter only grants the player 16 regular wilds. Wazdan spiced things up by adding a sack symbol that can steal your coins.

Full of cool and somewhat unique features, the company is having huge plans for this game. Andrzej Hyla, the Head of Sales at Wazdan, offered his comment on this release: “Larry the Leprechaun is one of many games recently released by Wazdan and one which we are extremely proud of. Bundled into this enchanted slot game are first-class graphics, rich player experiences and the full force of our Unique Wazdan Features. We anticipate Larry the Leprechaun to quickly establish itself as a favourite amongst players and operators alike.”

The game will be available at all partnered online casinos shortly.

The company serves as a software provider operating out of Malta with numerous locations in mainland Europe. It started out with the goal of creating complete online solutions which include complete online casinos as well as a whole variety of different games. The team that runs this company is fairly small but experienced one.

They have proven to be quite a capable partner for numerous operators in the industry. With this new game, they have met and exceeded everyone’s expectations.