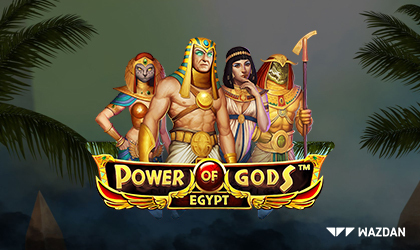 Power of Gods Egypt is a new extension to the ancient Egypt-themed slot machine inspired by Wazdan. This time, players enter Egypt's mythical world to join the mighty gods Isis, Bastet, Sobek and Ra. The slot is different than other Egyptian games, this one delivers a very intense game with thrilling features and bonuses, and most significantly, its impressive jackpot is 8,000x the stake.

The grid has an Egyptian structure, and the background is decorated with palm trees and gigantic pyramids. Obviously, the developer approached the design with care, and the animation and graphics have high-quality, making this latest title extremely exciting for play, while the soundtrack is quite traditional. When you play the game, a mysterious piece of Egyptian music adds the finishing touch to the atmosphere.

The title offers players the option to place bets between 1 cent and $100 per spin. The slot has a 5x3 grid with 243 active paylines, which means all contiguous symbols on the leftmost reel pays out. Depending on the gaming style, volatility can be modified, and players can choose between low, medium or high variance based on their style.

The RTP is 96.19%, which is slightly above average. As mentioned above, players can expect to win 8,000x the stake or when we talk in money terms $80,000 per spin when playing with the maximum betting option.

“Our thrilling Power of Gods™ series is back and this time it is more feature-filled than ever. With four separate bonus modes as well as a final gamble option to double a player’s winnings, it is sure to immerse all users. Our content portfolio continues to grow, bringing innovative mechanics and feature additions, and we can’t wait to see how Power of Gods™: Egypt is received by our fans across the globe.”

Wazdan Limited is a small development company based in Malta that started its business in Cyprus in 2010. The company started with server solutions and was licensed by the Malta Gaming Authority, Curacao and the United Kingdom.The company employs more than 50 people who strive with all their creativity to get closer to perfection. They are capable of releasing an average 2 games per month, and their slot portfolio includes over 100 titles. The company continues to expand over international markets through distribution agreements such as an deal with Asian game aggregator Solid Gaming, a partnership that allowed them to integrate content onto the EveryMatrix Casino Engine platform, and more active participation in critical industrial exchanges programs such as Summit of iGaming Malta and more.