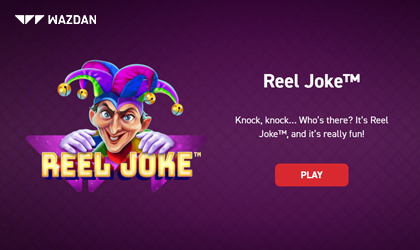 Wazdan has launched its Reel Joke video slot, which will surprise players with its great value. The game also has special features as well as a larger than expected play area. Players will also notice a classic joker theme that delivers quite an amusing and entertaining game.

The game has 6 reels, 3 rows and 20 active paylines that will be used for new combinations formed inside. Considering the maximum jackpot of 9,500x the bet, the slot is likely to be a high-volatile game, but the good thing is that this provider allows players to set the level of risk and the RTP of 96.20% is above the average. This title has few extra features which include moving reels, wilds, an infinite multiplier and extra spins.

“Reel Joke™ is a fun-filled addition to our slot portfolio, headlined by the helpful Joke character himself. A slot with a classic feel and cutting-edge mechanics, it marries up the best of both worlds for fans across the globe.“The thrilling Free Spins Round contains both Moving Reels and an Infinite Multiplier with an initial value, so players will be able to turn their Free Spins into incalculable wins if the Joke finds them worthy!”

Wazdan is an online casino games provider specializing in creating and designing slots. Each slot game has a design that has been ingrained in most of its titles since the brand’s inception 10 years ago. The brand has found a place in the iGaming industry, which is noticeable and proof of that is some its best works such as the popular Larry the Leprechaun video slot. The game provider pays great attention to the development of games that always have a remarkable design. This is what guarantees the uniqueness of the game's functionality. Since its founding, its name has appeared at game awards and it is obvious that as it continues to innovate and create good games, there will undoubtedly be more awards in the future for this brand.