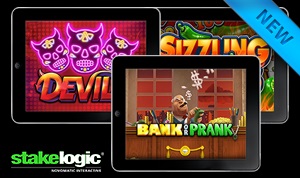 Fans of VideoSlots.com can look forward to the recent launch of THREE new slot titles from Stakelogic, a division of Greentube, established in 2014. The new games include Sizzling Peppers, Devils, and Bank or Prank. Thanks to the addition of the new slots, the online casino’s collection has reached a new total of more than 30 games.

The titles went live this past Friday, and each is equipped with its own unique theme and offerings. Devils, for example, delivers a 5x5 reel set, and a total of 10 paylines. Additionally, it offers up the chance for players to score up to 480,000 coins. It sticks to a classic theme, with several fruit symbols appearing across the reels. A devil bell serves as a key symbol, and when it appears, it can expand while awarding a re-spin with a multiplier between 5x and 8x.

Sizzling Peppers, on the other hand, is made up of 6 reels, but offers a similar set of icons, including cherries, bells, bars, and peppers. Setting this title apart from the rest is its Mystery Win feature. When two green peppers and a red pepper appear on the reels, a mystery payout is granted.

243 ways to win are showcased in Bank or Prank. This particular game boasts a maximum payout of 72,900 coins. It is further loaded with a crazy wild bonus, initiated by three locked treasure chests, and a mystery prize.

Try the new titles out for real money play at the site. The brand also plans to drop new slots in the near future, including Fruits Gone Wild, Tropical Adventure, and Valkyries of Odin.

Spice Your Luck with Burning Scatters