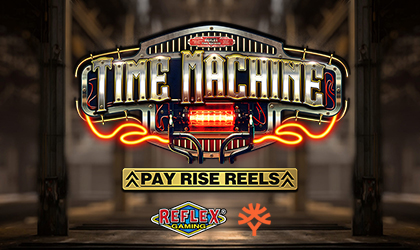 Time Machine is the latest online slot from Yggdrasil and Reflex Gaming that allows us to engage in a trip through time and space. It's a slot with a bit of a steampunk theme, in which the time machine is an incredible invention that enables players to travel to locations where large payouts are available! The game is played on 5 reels, 3 rows, and 243 ways to win. Because of the pay-rise mechanic, the grid can expand up to 7 rows and the number of active paylines increases up to 16,807. Wager-wise, players can bet between $0.2 and $100. There is a lower-than-average RTP of 95.50%, while this slot offers low volatility. There are bonus features such as wilds and extra spins.

Every Spin Can Result in Substantial Gains:

This title presents a work of art, where Reflex has done an excellent job in establishing an entertaining atmosphere. It has applied a steampunk/industrial touch to the design, which is complemented by futuristic music!

Stuart McCarthy, Head of Product and Programs at Yggdrasil, said: “We urge players to travel in time back to the Victorian age in our engaging new hit, Time Machine. With increasing reels and paylines, every spin can lead to huge wins, with re-spins driving engagement to new heights.”

Reflex Gaming has been in the iGaming business for a long time. It began operations in 2004, and since then, it has had a wonderful success tale. Initially, it developed bingo and arcade games across the United Kingdom and the Netherlands. Its games have captured the hearts of many gamers through the years, thanks to its captivating hues and soothing gaming experience. The brand began investing more and more in online slots about four years ago. Because the development indicates that individuals are increasingly turning to play more online, which was clearly a strategic option and complement to its current business. It has developed slots that may be played on all devices, thanks to investments in cutting-edge technologies and skilled personnel.