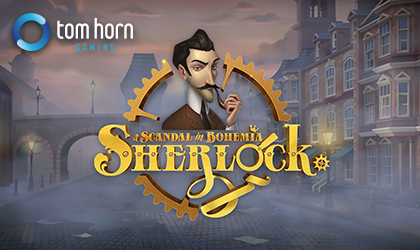 We all know that Sherlock along with his buddy, Dr. Watson, are one of the most interesting and intriguing fictional figures in the world. Together with them, we solved the mysteries and now with the brand-new video slot from Tom Horn Gaming, we will be able to do the same.

What’s Going On In Here?

The story in this game doesn’t differ too much from the one we got used to seeing in the TV series.

Namely, your goal is to find a way to get a scandalous image that was once in the possession of the King of Bohemia. The main target is Irene Adler and you need to help Sherlock catch her.

If you do that, you will be rewarded with the highest-paying characters as well as with two bonus games where you can choose a win round in order to receive as much as possible.

Furthermore, each time you spin you will increase the opportunity to trigger casino spins, so our advice for you – keep on spinning!

A feature round with an interesting title called, “The Paparazzi Bonus Game,” can be activated if at least three of these characters are found across the reels.

In this game you will come across four dynamic levels. Each of them has a certain number of options that you can choose from, fixed up in order from four to one. You have only one opportunity to find the paparazzi.

If you manage to do that, you will immediately end this bonus game.

Open Up The Newspaper:

One of the things Sherlock loves to do is to read them, so by opening them (meaning landing at least three of these icons anywhere on the reels) you will launch the newspaper additional game.

Unlike the previous one, here you will get to play only one level that holds six different options. The point is to find that photo, so once you do, it will end the game.

You can’t expect anything less from Sherlock! Of course, there is! Namely, if more than three scatter symbols are seen across the reels, you will blast-off either ten, fifteen or twenty bonus spins that cannot be retriggered!

After their latest Frozen Queen title, we needed something that is going to warm us up with a solid story and outstanding features and this is precisely what you will get in this game!