Take a Spin on Wild Gladiators from Pragmatic Play 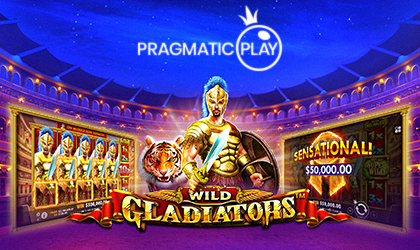 Gladiator-themed slots seem to be very popular among both developers and players too. They are usually filled with fast-paced features that are constantly keeping users on the edge of their seats.

We are not sure whether this was the reason Pragmatic Play created this game but what we do know is that it comes with very tempting features. Let’s discover it…

Every theme of this kind (for instance, Gladiator of Rome) comes with almost exactly the same story. It always whirls around these strong men, how they fight any other things that are in correlation with the game.

Here in this 3x6 title, players will stumble upon various interesting characters, such as chariots, a powerful emperor and empress, tigers and shields.

Excitement On The Rise:

One of the things that will give you goosebumps is the Super Wild Bonus that can be activated when a Super Wild character is seen on the sixth reel.

Ultimately, this impressive mode adds a wild icon to each of these five reels, which will further extend to fill up the entire reel if they are found in the center.

“Wild Gladiators captures all of the impressive atmosphere of the Colosseum and puts players in the thick of the action with well-timed bonus features and an excellent soundtrack.

We have a proud tradition of producing some of the industry’s most recognisable games, and Wild Gladiators exhibits our commitment to deliver fantastic game design and audio-visual excellence.”

Approximately two weeks ago, they released an equally amusing slot, Safari King, and this one turns out to be a great addition to their vast selection of games that include Mustang Gold, Madame Destiny and Da Vinci’s Treasure.

In the past twelve months they took their business to the next level by signing several partnerships with various prosperous corporations from the industry, such as Casumo, Kindred Group and PokerStars.

This year has just begun so their users can look forward to reading more about either their new games or other beneficial collaborations.