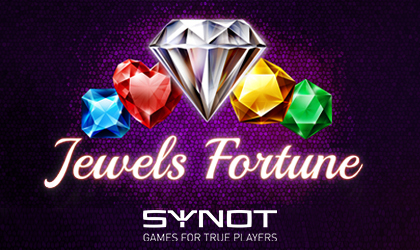 SYNOT Games has released a new slot game that brings Diamonds and gemstones in a flashy, potentially lucrative package. The game is all about the sparkly experience…

…and valuable bonuses. Players will be able to enjoy a smooth base game paired with attractive special features.

The World of Diamonds:

Jewels Fortune is said to be one of those slots that focuses mainly on gameplay. With that said, SYNOT has come up with a compelling theme. At its core…

…it is remarkably simple. The studio behind this release went with a solid color for the background that ends up adding a lot to the overall atmosphere.

Aside from the symbols themselves, there is nothing to distract the player from the gameplay. Speaking of symbols, all of them come in the form of gems. Higher paying ones feature actual gemstones and diamonds while the lower paying symbols are represented by the usual letters, only in this game, they are also made of gemstones.

With the core game mechanic being the key factor…

…it comes as no surprise that SYNOT used a proven setup that is known to deliver a thrill. The entire game is based on a 5x3 pattern that features 243 ways to win system.

As players are enjoying the base game, they can trigger the special feature as well. The game offers the Avalanche Respins mode that triggers cascading reels. In other words, once the player scores a win, the winning symbols disappear only to be replaced by a new set.

One more thing happens during this mode. Each win triggers a multiplier change. The game offers 1x up to 5x multipliers, all of which can be triggered with a win during the Avalanche respin mode.

Michael Polak, the Product Manager at SYNOT, said: “Gemstones and all sorts of precious Jewels are a popular theme that never disappoints, especially when it involves a new exciting feature such as avalanche respins. This adds another thrilling element to the gameplay as each winning combination leaves room for more wins!”

The developer was founded by a dedicated team of iGaming enthusiasts who sought a way to make the industry more fun. As a part of this effort, they have created original slots that push the boundaries in terms of visual solutions and base game mechanics. With over 27 years of experience in the industry, this company is by far one of the most respected software providers on the market.

It delivers 14 or more games every year and operates in over 20 countries of the world. With strong roots in land-based gaming, this company is notorious for being able to incorporate the feel and look of land-based slots into their online offer.

Over the years, it has risen through the ranks and is now a proud supplier to a number of tier-one operators around the world.