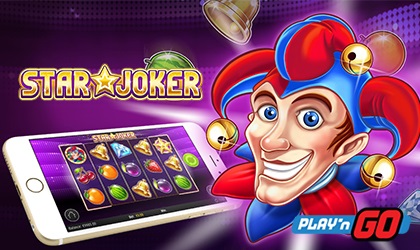 People all around the world are preparing for Christmas and New Year’s, however, there are others who are working hard to put smile one people’s faces. One of those companies is Play’n GO and even though it’s almost time for resting, they decided to give their fans one last surprise before the new year begins.

Have Fun with A Smiling Joker:

The name of this new video slot is Star Joker. Namely, it is a slot machine with a relatively typical design and symbols, such as, Lucky 7’s, Cherries and Plums. It has five reels and classical gameplay.

One of the features that we haven’t seen before is an added dimension where less experienced players can learn more about the general rules of the reel slots.

What Can We Learn from this Segment?

This tutorial is truly easy to comprehend. It comes with a certain guidance that gives you detailed information about the slots, how pay lines work, how can you determine a bet, the purpose of wild character and many more.

This is maybe the best option for those players who aren’t experienced enough due to the fact that here they can analyze and understand all aspects of the game, along with the choices they can make.

Notwithstanding it may seemingly look like this game is ordinary, however, it actually offers some never-seen-before elements that are going to simplify everything. The one we loved the most is that interactive aspect which is both useful and amusing.

Johan Tornqvist, CEO, gave his opinion of the game, saying:

“This game is another quality addition to our portfolio, and the interactive element is a great way to teach players knowledge we may sometimes take for granted in this industry and will help players play responsibly.

2018 has been a great year for us; we have released a number of high-profile titles that have performed exceedingly well and, with its gameplay and interactive elements, this game will be no different. Now we look ahead to 2019 and even bigger challenges for us to conquer!”

Thirteen years ago, this corporation was established, and, in the meantime, they have turned into one of the leading suppliers in the gaming industry. Their innovative and creative approach towards game has revolutionized this industry and make them one of the biggest names when it comes to casino supplier market.

Their recent reel slot called Battle Royal earned a lot of positive feedback following its release. They have received many awards for their top-notch slot machines and all of their games are perfectly compatible with any device.