See The Escapades of Henry VII Play Out in Battle Royal 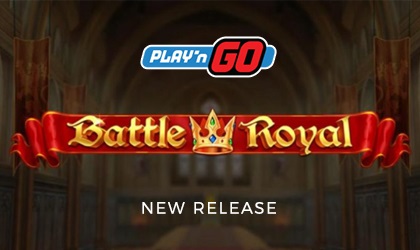 There isn’t a better way to go back in time than through a super-amusing slot machine. This time, Sweden-headquartered provider, Play’n GO is going to help you do that, with their own time machine in the shape of a reel slot called Battle Royal, inspired by Henry VIII.

A Game Filled With Enticing Features:

This is a 5-reel slot that comes with twenty paylines. Additional wilds, thrilling Royal Flushes, extra spins and pick feature. Besides them…

…you will also come across some low-paying symbols, such as the card suits, King Henry 8th  that represents the Wild icon, Henry’s disreputable six wives, and a Coat of Arms that acts as a scatter character.

More Exciting Details About It:

Surely, one of the most attractive features is the Royal Flush that can be activated randomly during the base game and it can transform every low-paying sign into the same character.

Furthermore, if the scatter symbol is seen on both first and last reel, you will launch a feature choice. You will then be invited to pick one of the scatters to reveal which feature is going to be awarded to you. There are two options – a Pick Bonus (Long Live the King) and additional spins.

During one part of the game (Bonus Spins the Heads Will Roll), you will have to make a very important decision. You must choose which of the infamous wives is going to live (meaning, survive the Extra Spins guillotine).

During every spin, one of the guillotines on the reels will drop. You will then see one of the wife icons either fully or they their top half on that reel. Once this happens, they will be beheaded, and that symbol is going to become Wild for the duration of this round.

On the other hand, if only the bottom half of this sign is seen on the top row, then it means that it will not lose the head and turn into wild. You’ll be able to play this feature until one wife icon is left alive.

Furthermore, if you the wife you’ve chosen doesn’t die, you will instantly gain a superb prize! The guillotine reels are the ones that will decide whether the only wife who survived is going to live.

You then must then choose a guillotine reel for her. Once you do that, one guillotine will fall. If it falls on the reel where the Wife is found, she will lose her hand and that means that the Long Live the King pick round is activated.

However, if she survives, you will be returned to the base game.

Besides all these sensational features, you will also come across the Long Live the King round where you must help the King grab loot and find a way to escape the dungeon. If you are being caught by a ghost, the total round win so far will be awarded to you. Moreover, if you choose to escape, the only thing you will receive is a multiplier!

Generally speaking, Play’n Go has really outdone themselves with this latest edition that is filled with fruitful rewards!