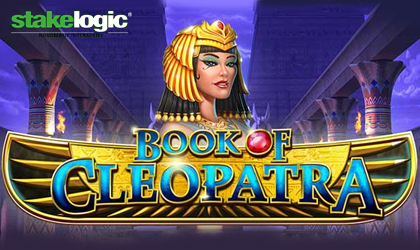 Stakelogic’s highly popular Book of Cleopatra has received a facelift.

…of entertainment. However, they have also brought the game up to speed with modern features as well as graphics.

The Queen is Back:

Once again fans of the developer are presented with an entertaining tale of Cleopatra. The latest game to come from this provider combines the essence of the original version with a fresh set of features. The game takes place in a dimly lit temple.

Surrounded by massive pillars and with hieroglyphs everywhere, the background definitely sets the mood for what is coming.

One thing every fan of the original will appreciate is the distinct presence of the quintessential Egyptian details all over the place. It’s the small things such as golden bezels and similar.

Symbols in this game are…

…a perfect match for the theme. The supplier went with the usual card royals in the lower-paying tier, but then invested a decent amount of effort into making them unique to the theme. The higher-paying set features various animals such as King Cobras, cats, and others.

Everything combined offers a solid dose of immersion in what is promising to be a worthy revamp of a classic!

At its core, the revamped release is a 5x3 slot game that runs on 10 paylines. The game brings a fairly entertaining base game; however, everyone can agree that it’s the special features that bring on the heat.

There’s the Bonus Spin mode that is triggered when you collect 3 or more wild scatter symbols. Interestingly, these act as both scatters and wilds.

…that allow players to directly interact with the game as well. We have the option to purchase bonus spins as well as activate the Super Stake mode. Last but not least, all wins can be double or more through the Gamble mini-game!

Stakelogic is one of the leading software providers in the iGaming industry. With a vast portfolio of successful games, this brand quickly rose to the top when it comes to entertainment value. Its team is made of professionals from all walks of iGaming life. So far, the company has managed to build a sizeable distribution network that is covering a large number of key regulated markets all over the world.