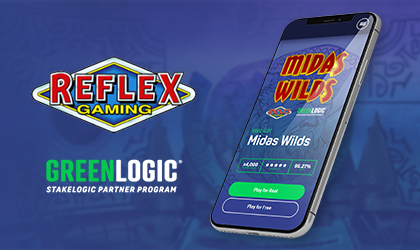 Stakelogic, in partnership with Reflex Gaming has launched the online slot Midas Wilds. This time, the developers were inspired by the famous story about Midas Kingdom. According to ancient Greek mythology, everything the king touched turned into gold. This title was developed using HTML5 technology, which enables punters to spin the reels even on mobile devices such as tablets and smartphones!

Midas Wilds comes with a classic layout of 5 reels, 3 rows, and 20 active paylines. As far as odds are concerned, the RTP is 95.20%. Players can bet anywhere between $0.2 and $100. This slot promises a decent potential win of 4000x the bet. This is a medium volatile game, which will suit most types of punters. However, the volatility can be high if players activate the Super Stake feature. As for other bonus features, there are several wild symbols, 3 scatter symbols, re-spins, and extra spins.

This is a real money slot machine inspired with a unique approach. King Midas comes in two forms, both of which will help players to win big prizes!

Head of Greenlogic® at Stakelogic, Salvatore Campione, commented: “From the initial spin to the last, this highly entertaining slot builds anticipation with every spin. With the Free Spins, players are taken on a hair-raising adventure. As the number of Wild Respins ramps up, and the multipliers kick in, the winning potential gets bigger and bigger.”

Mat Ingram, CPO at Reflex Gaming, said: “This game is our take on the popular King Midas theme. Combine this proven formula with the innovative Super Stake™ game mechanic, and you have a match made in heaven. I’m a big fan of Free Spins features that become progressively better as they play out, players will see that the Midas Wilds feature can give them amazing win potential.”

Stakelogic was founded in 2015 and is one of the youngest software operators. The brand is known for its innovative 360-degree slots. This has never happened in the casino gaming industry. It managed to launch over 140 video slots, but due to the small number of game releases, it became very popular due to its technology and innovative features, and the limited range of game content allowed the manufacturer to create all of their slots with a unique style and graphic design.