Stakelogic Disturbs the Lords of the Underworld with Gods of Death 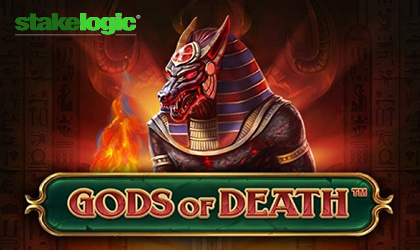 Stakelogic, one of the premier slot game specialists in the iGaming industry, has dropped a brand-new game titled Gods of Death.

The team behind the brand decided to give players a different taste of the ancient Egypt mythology by diving into the underworld.

The Treasures from the Other Side:

This latest release comes in the form of an ancient Egyptian adventure. However, it is not your average slot from this genre.

On the contrary, the team behind it has taken a very different…

…path that moves past the pharaohs and usual iconography. The theme we got is all about the gods of death, which brings an ominous atmosphere to the reels. This is best seen in the background design.

As the game loads up, players will find themselves in a dark Egyptian crypt. The only form of illumination comes from the two statues found on each side of the reels. Although similar to the statues of Anubis and other deities we’re used to seeing, these are much more ominous and borderline demonic. Each statue has a burning flame at its feet that further adds to the overall vibe of this slot.

Symbol design is in the same vein. The team behind this release went with the usual card royals for the lower-paying tier while the higher paying tier depicts various gods of death.

The 5x3 reel slot that runs on 10 paylines offers a medium volatility experience with an estimated RTP of 96%.

With that said, there are several features…

…built into the game that spices things up considerably. For starters, players will see expanding symbols. Then there is the bonus spin mode that further increases one’s chance to score big. The most interesting feature has got to be the risk/gamble mini game that allows players to double their wins.

Stephan van den Oetelaar, CEO said: “Gods of Death™ is an exciting addition to our slots portfolio, with a wealth of highly engaging features for our fans to get their teeth into. The awesome Gods hold the key to a gameplay structure which can change in an instant, keeping players on the edge of their seat and wanting more. We’re confident this game, with the added incentive of Super Stake, will really deliver the power of the Gods.”

Stakelogic is one of the more innovative slot game studios that is focused on introducing sophisticated gaming solutions to the iGaming industry. The company currently offers a large portfolio of games that have proven to be quite successful in some of the most competitive markets in the world.