Stakelogic Brings on an Epic Adventure in Dragons and Magic 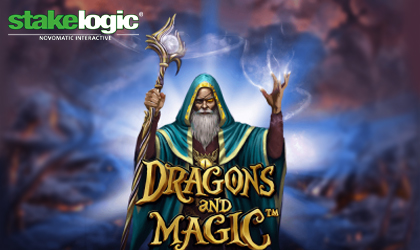 Stakelogic is dropping another hot titled this year called Dragons and Magic.

…wizards and mythical creatures. The game is all kinds of interesting with its theme but also its awesome features.

The World of Magic:

…are not an uncommon sight. It’s arguable that the team behind this game took inspiration from numerous works of fiction regarding this subject, especially when it comes to the scenery. Speaking of which, players can expect to land in a mysterious forest a soon as the game loads up. It’s a dark part of the woods, too. With such a simple yet fitting background, the title really sets the mood.

The symbols are on a whole different level. Instead of going with the usual card royals, the developing team went with color-coded potions. On the other hand, the higher paying tier is full of magical rings, lucky charms wizards, and more.

The 5x3 reel slot game that runs on a variable number of winning pathways. Players can encounter anywhere from 243 to 7776 ways to win, which is plenty enough to spice up the base game alone.

As far as special features go, there’s the Bonus Spin mode, Various Multipliers, the Expanding Reel feature and so much more.

Overall the game is packed to the gills with awesome stuff that can easily make someone’s day if they’re lucky enough!

Stephan van den Oetelaar, the developer’s CEO said: “With Dragons and Magic we have taken a popular slot theme and given it the Stakelogic touch to create a truly thrilling game. This has been achieved by adding plenty of features that deliver big win potential while keeping players on their edge of their seat with every spin. Dragons and Magic has been a real team effort, from the design to the math and mechanics, and showcases our talents and skills as a market-leading slot developer.”

Stakelogic is a leading software developer producing high-end games for the iGaming industry. The company offers a wide range of slots that feature innovative technologies and features. On top of that, the team behind the Stakelogic brand takes great pride in designing engaging themes that improve the overall player experience and bring a decent amount of immersion to the table.