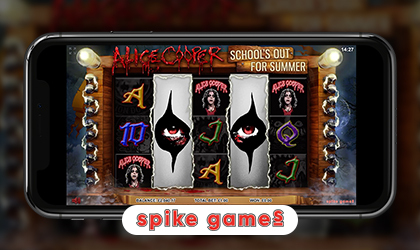 One of the biggest music legends, especially when it comes to hard rock and heavy metal genres is certainly Alice Cooper. His career spans more than fifty years and some of his most popular songs have already become evergreen.

That’s precisely one of the reasons why UKGC-regulated provider, Spike Games, decided to design a game as a virtual tribute to this musician, aptly dubbed the same name as on of his classic hits, School's Out for Summer.

FunFair Technologies To Distribute It:

Now, as far as launching is concerned, FunFair Technologies, one of the leading gaming platforms in the world has released this game to blockchain casino.

This is the second slot from the popular developer that has been published on this platform. Namely, they have seen how successful their previous game, Ocean Blaster 2 was, so they made a decision to do exactly the same with this one.

Learning More About The Specifics:

This video slot comes with five reels, twenty pay lines and it contains a plethora of exciting features.

Besides that, it is also equipped with sensational sounds and dynamic gameplay that surely beats the competition in many ways.

Certainly, one of the most thrilling parts of the game is the stacked Twin Wilds Bonus, along with the Casino Spins Bonus, which sees gamers gamble up a snake ladder.

Furthermore, it also has a Death Row Pick A Win feature where players can choose a switch from the electric chair in order to instantly get a superb prize.

This game has been modified with a goal to be run by smart contract, removing the need for a remote gaming server, ensuring fairness is guaranteed while at the same time cutting short hosting costs.

Stefan Kovach, FunFair’s CCO gave a few details about this game and said:

“The theme of the game may be a blast from the past but the technology is not. Spike Games has transported School’s Out into the future with the integration of blockchain and the benefits of guaranteed fairness it provides.

Ocean Blaster 2 has been a huge hit and I’ve no doubt that players will be rushing to play Spike’s second game on the FunFair platform.”

“School’s Out has already rocked players around the world and we’re excited to follow-up on Ocean Blaster 2 with another smash hit.

“We’re proud to have brought the first two traditional titles to the blockchain, and looking at our roadmap of games to come, this is set to be an exciting journey as we shape the future of online casino gaming.”

Those of you who are interested in trying out this reel slot can now find it on the first FunFair-powered casino, CasinoFair and also at the FunFair Showcase.