Spearhead Unearths the Mysteries of Egypt in Lara Jones is Cleopatra 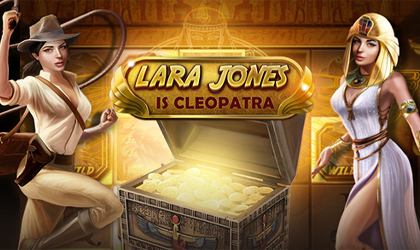 Spearhead Studios is slowly making a name for itself as an innovative software provider.

The company has had a lot of success with the…

…earlier release of Book of Souls, which has prompted them to go live with another similar game. The sequel we’ve been waiting for is here and it’s called Lara Jones is Cleopatra!

Exploring the Tombs of Egyptian Rulers:

The team behind Book of Souls, has offered its fans a chance to discover what lies beneath the mighty tomb of Cleopatra. It has done a great job of actually creating a sense of adventure.

Namely, as the game loads up, players find themselves looking at the entrance of a temple in the middle of the desert. The only thing disturbing the desolate scene in front of you, are the pyramids found out in the distance to the right of the reels.

The cool thing about this slot is the fact that it changes backgrounds as players progress through various features. Before you know it, you’ll find yourself inside the temple!

The new release is a fairly standard slot game in terms of core game mechanics. It uses a 5x3 reel grid and 10 fixed paylines. The max win potential is right around 17,000x the original bet.

There are also a few special features…

…such as the Cleopatra Spin as well as the Gamble Ladder feature. Overall, the game offers a thrilling and potentially rewarding experience.

Kevin Corti, Game Development Director at Spearhead, offered his comment: “Our internal team has excelled, once again, in producing this game. The math model is highly engaging, the artwork and visual are stunning, and the audio effects close to a cinematic experience. I am very proud of everyone who worked on Lara Jones is Cleopatra and I am extremely confident that players will love it.”

Mathias Larsson, Managing Director at Spearhead, says: “I am thrilled that we are bringing our lead character, from our top-performing game The Book of SoulsTM into our latest title, Lara Jones is Cleopatra. She will continue to star in upcoming titles, along with many other entertaining characters which we plan to introduce in the forthcoming months. Lara Jones is Cleopatra is our 4th game release of 2020, demonstrating that we are truly delivering high-quality games in rapid succession. In Q2, we will maintain this momentum, releasing a minimum of 5 new titles.”

Spearhead Studios is one of the youngest software providers in the industry. The company is headquartered in Malta and currently employs a small team of professionals who are trying to give their clients something new, exciting and innovative when it comes to slot games.