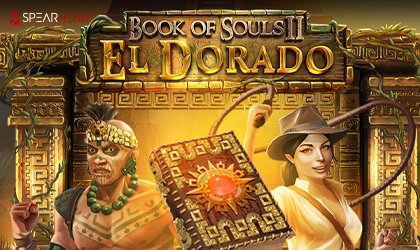 Spearhead Studios has dropped another hot title for this summer. Namely, they’ve added the Book of Souls II: El Dorado to their portfolio of slots.

…Lara Jones, this new adventure goes deep into the ancient city of El Dorado where riches await and mysteries need to be solved.

Lara Jones is Back:

…shifted her focus on another Mayan mystery. More specifically, she’s on her way to discover the mythical city of El Dorado! Just like last time, players are presented with an impressive theme that is packed full of incredible graphical details as well as awesome new features.

As the game loads up, players are presented with a wall of reels that is covered in gold. The wall is outlined by golden arches. Looking beyond them, there’s a view of the ancient city lying just within reach.

Symbol design matches the theme and is very detailed. The lower-paying tier features card royals styled to fit the environment. On the higher-paying tier, player can expect to find various icons that fit the culture of this long-lost civilization.

The 5x3 slot game runs on 10 paylines. The game promises a thrilling base game that will keep you on the edge of your seat.

However, the real fun starts when you…

…trigger some of its special features. There’s the El Dorado Fortune Wheel that can be triggered randomly during the base game.

Another random feature is the El Dorado Cascade Spins that remove all winning symbols, replacing them with a new set.

Lastly there’s the classic bonus spin mode where players can score 6 or more bonus spins depending on their luck.

Statements from the Provider:

Mathias Larsson, the provider’s managing director, said: “Book of Souls II: El Dorado is our sequel to our blockbuster game Book of Souls. Yet again we get to follow the main character Lara Jones deep into the jungle to find hidden treasures. This time around we’ve put more features and higher volatility in the game. This is our first out of three flagship games for this year. We have spent a great deal of time to get this game perfect for the players who already love the work we’ve done with the first release.”

Kevin Corti, game development director at Spearhead, added: "Book of Souls II: El Dorado is probably our most visually impressive game to date. It delivers a win potential up to 20,000x, is feature-rich and, as usual, features a cinematic soundscape. Our goal was to transport players to the South Americas to the site of an ancient, golden temple coated in gold, lost in the jungle, and with the promise of discovering immense treasures inside it.”