Spearhead Studios Cranks Up the Excitement in Dark Joker 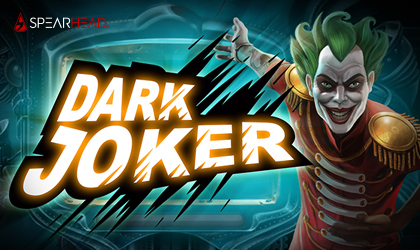 Spearhead Studios has brought one of the most popular comic book characters to life again in Dark Joker.

…a comic book aesthetic that is promising a rather authentic experience for the fans of this particular character.

The latest release is a comic book-inspired adventure with…

…a classic feel to it. Fans of this popular character will enjoy this game’s brooding theme and unique cyberpunk aesthetic. As far as the symbols go, the team behind the studio went with a mix of fruits and theme-related iconography. Overall, the visuals in the game are outstanding and immersive.

The 3x3 classic slot game relies on its volatile gameplay to deliver potentially awesome wins. The game offers up to 1000x jackpots while the Joker himself is the wild.

Despite the largely classic feel of the game, there are still some special features…

…available. Namely, players can trigger the Dark Joker Re-Spin by having two reels stacked with the same symbol. Once triggered, the stacked reels are locked and the remaining one is pushed into a re-spin mode.

Then there’s the Wheel of Multipliers that brings a random win multiplier up to 10x.

Mathias Larsson, Managing Director for the developer, says: “Dark Joker is the first release of 5 games in Super July. We are quickly building a strong portfolio of entertaining titles. Dark Joker it’s a great fast-paced game with higher winning potential than your average Joker game.”

Kevin Corti, Game Development Director, also added: “Dark Joker is a game with a tonne of personality. If you ever wanted a game that delivers a gripping, “High Octane” experience, this is it. Dark Joker has an incredible intensity to it, driven by the speed of the spins and animations, the visual effects, and the terrific, high-energy soundscape. We are confident players will love it.”

Spearhead Studios is one of the up-and-coming software providers who are slowly but surely making a name for themselves in the industry. The company has already built a considerable portfolio of quality slots and is actively improving its distribution network. The team behind the brand consists of talented and seasoned professionals who understand what it takes to make an entertaining slot game. That’s why most of this studio’s games have experienced success in most regulated markets where they were released.