Something Completely Different from Betsoft 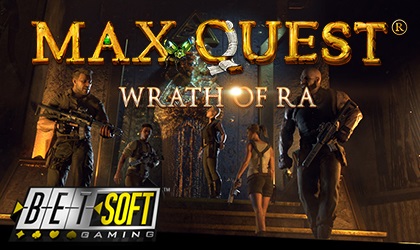 Max Quest: Wrath of Ra is bravely trying to do something most slots have not dared to even dream of for before. Though the new title is still a slot and all about gambling, it manages to bring some fresh air into the genre. This one is worth looking into even if you are not going to play it with real money, given that it opens a whole new door for other slots to walk through. It remains to be seen if the game becomes popular enough for Betsoft  to produce more similar games, we certainly hope so!

So what exactly is so amazing about this game? Well, to start with, you select your room, since the game can be played by multiple people at the same time, and then you buy loads of bullets. Once you got your gun loaded you enter the room and start shooting. There are no reels, instead, you just keep shooting at the targets on the screen until you run out of bullets. Each kill nets you a prize.

A bit confusing so far? Not to worry; it all plays out rather automatically as you can simply elect to autofire enemies, which is the same as keeping the reels spinning. What’s more important are the features of the game.

First of all, as you play you complete quests. These quests can increase your level, same as killing the mummies and zombies. Higher levels give you higher wins. To help you kill the enemies you can buy different weapons, all with different characteristics. Some weapons, such as grenades, can kill several enemies at a time, while others can cause more damage.

Secondly, each time you destroy and enemy there is a chance that even greater one rises in its stead. These are what bring the really big wins into the play, as a single bullet can result in a payout of up to 5000 times what you paid for the bullet!

Thirdly, at the end of each round one of the ancient gods may rise to challenge the players. Each bullet fired has the chance to result in a payout, and the prizes go quite high here as well. All of this also allows the players to compete in leaderboards to win additional prizes. This last part depends on the activity and popularity of the game, and it remains to be seen what kind of prizes will be laid out if the game becomes popular enough. Certainly, it’s a nice change by itself and something that has so far only been tried in slot tournaments and such.

How do I play the game then?

Just choose a casino, make a deposit and start shooting! In the end, the game plays out just like any other slot. The RTP is no lower, and the wins no smaller. What makes this game so different is the added level of player interaction. So, if you are tired of the traditional slots this is a perfect game for you to try!