Skillzgaming Brings on the Sweet Surprises in Monster Blast 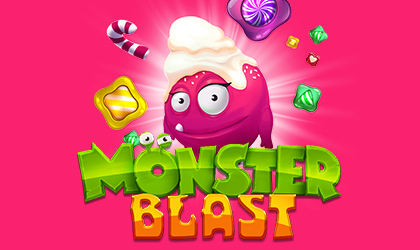 Skillzgaming has announced the release of Monster Blast – its latest game that packs a whole lot of entertainment in a visually engaging package. The game is anything but standard, which is arguably its most attractive trait.

The developer has decided to sweeten up the July with another awesome release. Its latest release belongs to more immersive games currently available on the market. The theme places the action in a place where sweets are everywhere. Those with a sweet tooth are in for a fun adventure that can potentially lead to lucrative prizes!

The background depicts a candy forest with candy canes all over the place. On the other hand, the reels are located under a treehouse in which a monster is making candy.

Many aspects of the background are animated, thus giving players…

…a complete visual experience as they play. Symbols come in the form of card suits but also various candies. The visual experience is followed by a subtle but fitting soundtrack and sound effects. Together, these make for entertaining gameplay.

The new release is no ordinary slot. It is a 5x5 release that uses a cluster system. In other words, players will have to match 3 or more symbols to win.

Another defining aspect of this type of base game mechanic are the cascading reels. Every time a winning cluster connects, it blows up and new symbols take its place. This alone leaves plenty of potential for higher wins.

…comes packing all kinds of special features, including missions, a leveling system, and unique monster bonuses! On top of these, there is also the Mega Win Prize Wheel that comes bringing all kinds of interesting prizes.

The brand has set a release for the title on July 20th when it will become available through this company’s network of affiliated online casinos.

Skillzgaming is an innovative gaming studio that is constantly working on new and improved gaming content for the iGaming industry. The company is also known for developing a brand-new genre of games that are building upon the slot game format and adding a whole new dimension to it. Fans of classic one-armed bandit games can expect an innovative take on this popular form of entertainment. The overall knack for innovation has allowed the company to put together a large distribution network. So far, the company has added several prominent casino operators to its roster of partners. The names on this list give the provider the ability to distribute its games to a variety of key regulated markets around the world.