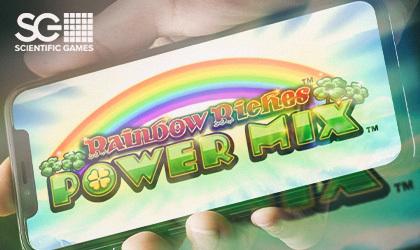 Scientific Games has released, in collaboration with Barcrest, the latest online slot Rainbow Riches Power Mix. As always, this will be an Irish-style game with lucky symbols scattered across the reels. If this sounds familiar to you, it might be because this is the Rainbow Riches Pick n Mix version with four grids. The symbols are 10, J, Q, K and A, followed by the game logo and a green landscape.

The action takes place on 5 reels, 3 rows, and 7 active paylines. This is a medium volatility game, therefore players can expect more frequent payouts. This game is not expensive or too risky to play as the betting range goes between $0.2 and $20. The RTP is 96.09% and the maximum win is 12,500x the bet. Players can choose which bonus round to play: road to riches, magic mushroom, pots of gold, cash crop, or extra spins. But that’s not all; this game also has multipliers, big modifiers, and a power mix super feature.

For everyone who loves the Rainbow Riches slots, Power Mix offers you the opportunity to feel the power of all four grids at once!

VP Game Development at Scientific Games, Rob Procter, commented: “Rainbow Riches Power Mix marks an exciting milestone for this truly iconic series. We know just how much players love experiencing alternative game formats within the overall Rainbow Riches theme, and this slot does that and much more. We’re incredibly proud to have continued modernizing the much-loved franchise, building on the success of Rainbow Riches Race Day, which we released earlier this year.”

Scientific Games, the operator of online games, is the name of the parent company that owns Barcrest, WMS Gaming, and Bally Tech, but they are also the developers of the casino software. Founded in 1974, the brand was first known for its lotteries and then expanded into video slots for the land-based casino market. The online casino world was relatively calm until the aforementioned companies were acquired in 2012. All the content it produces is available on all major software platforms, including desktop computers and mobile devices.