Saucify to Launch 4 Games in 4 Months 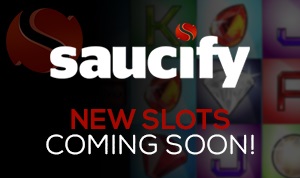 If you’re a fan of Saucify, we’ve got a few new titles to share with you. In fact, the brand is set to launch four slots over the course of the next four months. As they go live, players can expect lucrative deposit match bonuses and VIP offers to celebrate their arrival.

The first is scheduled for a September release. Stones & Bones is the name, and the game is inspired by the prehistoric era, with cartoon characters decorating the screen. With a comedic element, players can surely look forward to a few laughs, and a good time.

Sirens Serenade is due out in October. No, we’re not referring to the Sirens of an ambulance, but instead, the vixens luring in sailors in Greek mythology. The 3D title plans to bring endless excitement to the table, so don’t hesitate to spin the reel of this one when it comes out.

A Japanese-themed title, with elements from the 14th century, Tanzakura, is set for a November launch. The slot will embrace the tale of two samurai hunters who set out on a journey to find a magical, red-crowned crane.

Finally, the month of December will see the introduction of Mrs Green’s Plant Emporium. Explore an array of strange and beautiful greenery in this 3D game, which has an element of mystery thrown in the mix.

Saucify is dedicated to providing premium online gaming and casino software. The innovative brand stems from BetOnSoft, which rebranded to its current name back in 2014, and has since acquired quite the successful reputation.