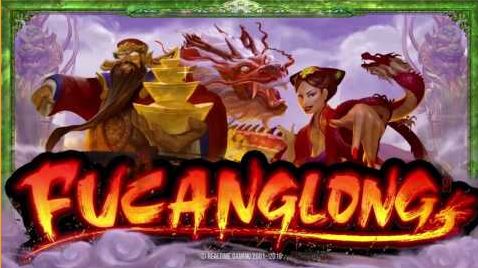 You may be scratching your head as to what on earth the theme of this latest title is with a name like that. Don’t fret, because the answer can be cleared up with just a brief explanation. The term, ‘Fucanglong’ refers to an underworld dragon, which protects a myriad of lucrative treasures, according to Chinese mythology. There’s no need to fear, as dragons in Chinese culture are seen as kind creatures, rather than the evil or menacing depictions often portrayed in the popular film industry.

The slot serves as an All Ways Pays games, complete with 5 reels. Along with crisp, 3D graphics, the slot is also equipped with an assortment of bonus features. For starters, it has a wild symbol, represented by the dragon, of course. It substitutes for all other icons on the reels, except for the scatter (represented by dragon mountain), as a means of completing win combinations. The wild also has the ability to expand during free spins to award additional wins.

Three or more of the scatters are needed to initiate the free spins feature, which can also award up to 8x multipliers. The dragon pearl scatter holds the key to 8 free spins, with a pearl revealing a prize at the end of the spins. In the event that your bonus win is lower than the value of the prize revealed by the pearl, a Fucanglong feature will begin.

The game is scheduled to go live at South Africa’s Springbok Casino on January 11th of 2017. The casino’s manager, Daniel van Wyk, commented, “Of course, while in western mythology dragons are fierce and destructive creatures that kidnap maidens, in China they are spiritual and cultural symbols that represents prosperity and good luck. And because, this January, not only do we have the western New Year but the Chinese New Year also, we decided that Funanglong would be the perfect way to wish all out customers happiness and prosperity for 2017."

The Season is Upon us, So Check out these RTG Christmas Slos

Celebrate the season with these RTG Xmas Classics!

Take a look at these slots, casinos and bonuses!

Check out these slots coming out in our favourite casinos!