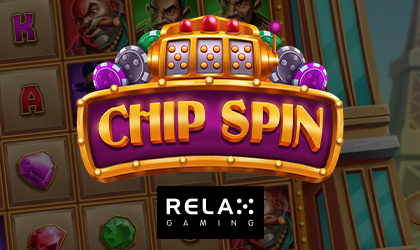 Relax Gaming will take players on a vibrant and colorful adventure to the entertainment capital of the world, where players can tour the city of Las Vegas. Here, players will meet the Connected Ways engine, which is a bit like the Cluster Pays mechanic. For some reason, the supplier decided to dive completely into the main game where there are occasional small to medium payouts.

The jazz soundtrack adds a nice touch to the game’s atmosphere, and Chip Spin is played on 5 reels and 5 rows. This game promises a maximum potential win of 25102x the bet. The RTP is 96.41%. The betting range is decent and fits most of the players as the minimum betting option is $0.1, while the maximum is $100.

Thanks to Relax's innovative approach, it hard work is recognized by the industry, having received a record 16 nominations at the EGR B2B Awards in 2021, as well as the award for Casino Content Supplier!

CPO, Simon Hammon, commented: “I think it’s fair to say that we’ve dealt operators a winning hand with this game. Our development team has done a great job in creating a game that stands out among the competition. Chip Spin not only avails itself of a timelessly popular poker theme that we know resonates well with players, but it’s a great slot experience in its own right, with a host of engaging features ready to wow our fans the world over.”

Relax Gaming has been increasing its library of games for almost 10 years, which has given it a lot of time to research and test the types of features and functions that players appreciate the most. The company has already established important partnerships with some of the well-known online casino content aggregators, but it is constantly looking for new partners and new places to showcase its games. This casino provider launched more than 60 games where the majority are slots, however, there also a couple of table games too. In 2019, the company released a new version of The Final Countdown video slot, created by Big Time Gaming. It was one of 50 new trade deals the company signed in just a few months. This is clear and compelling evidence of the rapid growth of the brand's reputation as one of the most dedicated providers across the iGaming industry.