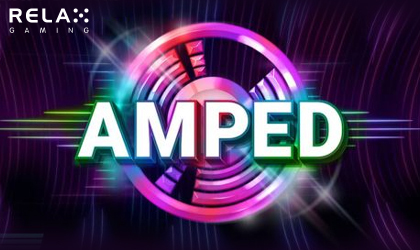 Relax Gaming has released a slot which is adorned with gems and simple symbols associated with neon music, and they call it Amped. It may be a bit of a strange combination of symbols, but in the world of online slots, this is common and something which providers love to use to get the attention of punters. The slot has 5 reels, 4 rows format and 30 active paylines. The betting range goes from $0.1 to $100 which is standard nowadays, and its RTP of 96.37% is above average. The highest paying symbol pays 15x the bet for five of a kind, and players will meet quite often with extra spins and bonus rounds because they will be activated quite frequently thanks to medium-volatility.

The Wild Reel Bonus Round can also bring some nice payouts and the game has 4 scatter symbols, each one is responsible for a different extra spin round. Scatter symbols are a substitute for all regular symbols and help players to hit a winning combination. Wild symbols pay out the same as the highest paying symbol- 15x the stake. Extra spins are activated when at least 2 scatter or wild symbols appear anywhere on the grid. As long as players keep getting new scatters, an extra spin will be triggered again and again.

With orange scatters, players will get Electro Expanding Wilds, which essentially cover the whole reel. Players who successfully hit 3 green scatters will receive Big Bass Sticky Wild extra spins where the Wild symbols will become sticky during the spins. Blue scatters will activate the Remix Synced Reels which means that two or more reels move together with the same symbols that appeared on the reels. Thus, no more than 5 reels can work simultaneously.

Relax Gaming is an online gambling company that has been operating since 2010 and has grown steadily across Europe. It started partnering with some of the largest operating casinos and has become known for its bingo and poker products. Today, the company has offices in Spain, United Kingdom, Finland and Malta.

The provider’s lobby of games mainly contains poker and bingo which shows that it doesn't have many traditional casino games in its portfolio. However, players will find a few video slots and blackjack variants in the library too. Nevertheless, its reel games are entertaining and contain good graphics and features. Its popular reel titles are games such as Dragon Rock, Ragnarok: Fall of Odin, Epic Joker.