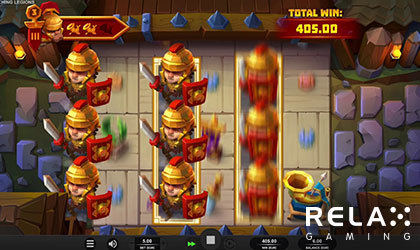 Relax Gaming has faced the enemy on the field of battle with the release of the Marching Legions slot.

The game is packed with interesting features and…

…a theme that is different from most games on the market, that’s for sure. The supplier proves its ability to turn just about anything into a fun slot.

The game brings the…

…Roman lifestyle and aesthetic to the reels which will impress the fans of SPQR. The background is creative in the sense that it provides a top-down perspective on what is arguably the biggest legacy of the Roman empire – their road network.

On top of the relatively promising base game, it offers…

…several interesting special features that add some spice to the game. The first one is the Marching Respins which is triggered when a stack of legionnaires is landed on the reel.

Once the whole stack is maxed out, the stack marches to the…

…left and the reels are spun, allowing for more stacks to go on the march. Then there’s the Nudge feature that is activated when 2 partial legionary stacks.

Additionally, every time a stack marches off the screen, one point is made towards the Bonus Spin mode. Bonus spin mode in this game is different compared to most others. Once triggered, players get one legionary stack, while an additional one appears on the reels with every next wave. Last but not least, Pragmatic Play has left an option for players to purchase bonus spins if they wish to.

Simon Hammon, the developer’s CPO, said: “Marching Legions is a bold new addition to our portfolio that combines exciting features with fun graphics and animations to make for an all-round engaging game. The winning opportunity with this slot is sure to draw in a range of player types as they rally the troops in quest of big wins and rewarding slot experience.”

Relax Gaming is one of the leading brands in the iGaming industry. The company is known for its high-quality slot game titles that are offering innovative features and thrilling gameplay. With a talented team of professionals at its helm, this brand is powering onward and slowly becoming a dominant name in various key regulated markets around the world.