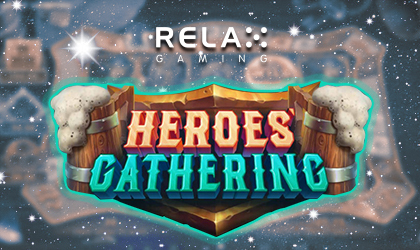 Relax Gaming has just announced the release of its latest slot game. Titled Heroes’ Gathering, the new game depicts an epic battle of good and evil that is happening…

…right there on the reels. Players are presented with a battlefield where wizards, goblins and fearless knights are duking it out.

Creativity on a Different Level:

Modern slot design is refined and about as predictable as it gets, but it’s rarely innovative. At least in terms of graphics and the player’s perspective. This developer is one of the few slot game specialists out there…

…who is known for taking a different approach to game design than most. The title brings a fresh perspective that has an epic vibe to it. The scenery depicts a tabletop that could easily belong to a medieval tavern, with a bunch of objects thrown all over the place.

The reels are framed inside a table game, which is exactly what gives the whole game such a unique vibe. Combined with the lightly animated objects surrounding the reels, the whole scene creates a decent level of immersion. As far as symbols go, players can expect to see various characters fitting of an epic adventure such as this one.

There are goblins, knights and wizards battling each other on the reels.

Thrilling Features Beyond the Core Game:

The title a 5x3 reel slot that runs on 20 fixed paylines. The core game is exciting enough, but it’s the special features that make this game the thriller it really is. One of the first things…

…players will most likely encounter is the Table Game feature. This is essentially a bonus spin mode but with the added table game mechanic. In other words, when the mode is triggered, avatars will start moving around the board depending on what’s happening on the reels.

There is also the bronze, silver and gold prize pot, that players fill out as they play.

Simon Hammon, Chief Product Officer at Relax, shared a comment regarding the new release: "Heroes' Gathering is another fantastic addition to our in-house slot portfolio that offers engaging boardgame-inspired gameplay and unique Bonus Round designed to appeal to a range of player styles and audiences. Its classic theme brings all the thrilling features together in a complete package that is both visually appealing and loaded with adventure."

Relax Gaming was founded in 2010 with the goal of bringing refreshing content to the iGaming industry. The founding members of this company believed that they could bring something new to players worldwide.

Since then, the supplier has grown to become a true figure of authority when it comes to slot games and other gaming software. The company operates from several locations in different European countries, building high-quality slots to this day.

Harvest Wins Slot with Super Pattern Offering up to 12 Wilds

Golden Calaveras is a Wild Ride for Online Slot Fans