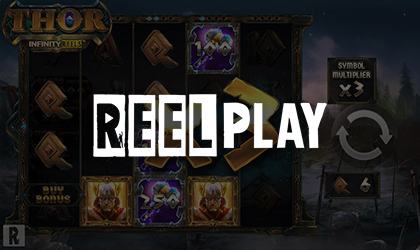 Thor Infinity Reels comes after Reel Play's immersive Odin Infinity Reels Megaways. The state-of-the-art engine continues to expand. Here it's all about the classic Streak Respins jackpot feature. The supplier’s latest release has all the attention given to the Odin and now players will meet with his son, Thor. Thor Infinity Reels is launched through Yggdrasil Masters Program, while simultaneously gaining access to technology from GATI, Game Adaptation Tools & Interface technology.

The action takes place on a large 3-reel, 4-row layout, and the background is filled with swords, fog, pine trees, mountains and a sky filled with stars. The mathematical model comes with high-volatility and an RTP of 96.2%, which is above the average these days and it can go up to 96.6% if players purchase the bonus. The title is available to all kind of devices either mobile, desktop, or tablet players are able to enjoy the game the way they prefer. The betting range goes from a minimum bet of $0.2 up to a maximum bet of $40 per spin.

At the center of the action is the infinity reel mechanic, which adds reels and symbol multipliers when the wins happen. On the right side of the grid, a reel is added when the winning combination occurs, and if new symbols increase the win, the process repeats again. As the name of the feature implies, Infinitive reels, the endless adding of reels stops when no new winning symbols are added.

Founded in 2014 as Chance Interactive, the company was renamed ReelPlay in 2019. Since its beginnings, this Australian-based company has been developing and broadcasting fun slot games for players and business partners. The provider works as an independent organization with main headquarters in Sydney. The creative team is filled with artists and developers and has more than 50 employees. It offers not only great slots but also all other casino games. The company launched several slot machines with gorgeous 3D designs, great graphics, and tons of bonuses. Its games are designed to remain memorable, innovative and exceptional, and going their game library is filled with popular titles such as Atlantis Megaways, El Dorado Infinity Reels, Buster Hammer and more