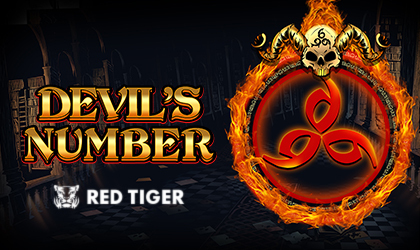 We’ve seen a lot of different video slots so far that touch upon various topics but… nothing like this one.

Strangely, we have encountered vampire and zombie-themed slots, along with several others from the horror genre, but Satan wasn’t in any of them… until now!

Award-winning slots and software supplier, Red Tiger Gaming, has decided to reveal its dark and devilish side and showcase it in its brand-new reel slot titled, Devil’s Number.

The entire story is set inside of gloomy and eerie library. Furthermore, this 5x4 slot sort of looks like an experiment, especially if we take into consideration the fact that this is the first game that was developed in its newest lab, R7 Studio.

What Can We Find Here?

Games like this one usually come with very interesting and odd symbols, and that’s precisely what you can expect here. All characters appear to be inspired by some kind of witchcraft or sorcery; but don’t be intimidated by them, because with each spin, players get a chance to grab up to 2,500x their original stake!

Surely, the most lucrative part of the game is the Mark of the Beast, a feature that is randomly triggered during gameplay and it is here to get rid of low-paying icons.

Besides that, it also enhances all high-paying icons whenever they are active. The reels also consist of a casino spins mode that cannot be easily spotted and in case consumers succeed in unleashing the Secret of the Beast, they will be able to grab twelve additional spins, during which they can collect valuable prizes!

“Devil’s Number challenges players to face the horrors of the underworld in search of riches.” “With its hidden free spins mode and randomly activated features it will keep slots fans on the edge of their seats as they progress through the game.”

It’s important to mention that all their games can be mixed with their superb jackpot software, along with the tournaments feature and Smart Spins marketing tool as well. Each of these contribute to the overall gaming experience.

Although it’s only the middle of April, Red has already achieved so much this year. At the beginning of the month they joined forces with Big Time Gaming and launched an outstanding slot, while just recently, they obtained a Gibraltar license.

Furthermore, with the help of this useful tool, they will be able to export their slots to some of the most important online brands as far as this industry is concerned.

Various operators will now gain access to their portfolio in one of the most important gaming jurisdictions.

Hamilton, CEO, stated that this business step was part of their strategy to continue reaching other regulated markets. He said:

“We’re delighted to have been given the seal of approval by the Gibraltar regulator. Obtaining a licence and establishing a presence in Gibraltar is a logical progression for us as our business in Gibraltar continues to go from strength to strength, with big operators like Bet Victor, Addison Global and 888 already added to our long client list there this year. This continues the great momentum that Red Tiger has gathered during the course of the last 12 months and follows the award of similar licences in Malta and Alderney.”