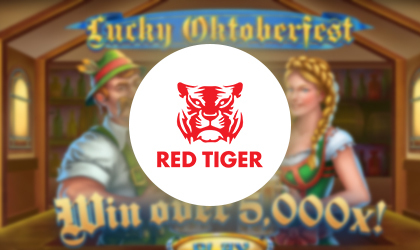 Developer, Red Tiger has unveiled a new game to be released soon, inspired by the famous German festivity – Oktoberfest. Lucky Oktoberfest is a game in which the beer (or Bier, if you prefer) flows freely…

…and so do the many special features that the developer has cooked up.

The festival itself is one of the largest traveling funfairs in the world and is held annually in Munich. The Bavarian capital sees over six million people every year during the 18-day runtime of the festival.

It’s not just a massive number of people…

…there’s also a staggering amount of beer consumed – more than 7 million liters (that’s about 2 million gallons for those who use imperial measurements).

The festivities have a long history and have been held since 1810. And now…

…the video slot developer is celebrating this rich history with its latest release. It’s a 5x3 title with 10 fixed paylines.

Just like the festival, beer plays a huge role in the game as well.

The first of many features involve beer mugs that appear on reels 1 and 5. When they appear at the same time they will toast and cover random reels. When they’re revealed again symbols will be swapped for the same random winning symbols.

There are extra spins too…

But that’s not all. The game has additional features tied to the extra spins. Two stereotypical German beer-drinking characters – Hans and Helga can appear on reels 1 and 5 respectively.

If Hans appears with a beer mug the total win multiplier will be raised. And if the same happens with Helga, punters get more extra spins. If they appear together, then both rewards will be given.

The game is releasing soon to all online casinos that carry games from this developer.

Even though Oktoberfest is done for this year, punters can feel the warm and welcoming atmosphere all year long when they spin the reels of this offering.

The developer is continuing their release schedule after recently being acquired by Swedish iGaming giant NetEnt for a princely sum of 220 million pounds.

Red Tiger is a casino software development company that was established in 2014 by a group of industry veterans. Their team has a proven track record of casino game development in Europe and Asia.

They have a team of mathematicians, graphic designers, software developers, audio engineers, gambling experts, and account managers who are dedicated to bettering player experience.

At the company, they call it – “the science of fun.”