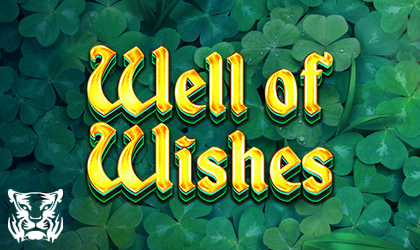 Red Tiger Gaming, one of the more innovative software providers in the iGaming industry, has started a countdown timer on their latest release – Well of Wishes. The new game brings an interesting…

…set of features as well as the supplier’s brand-new game engine.

Red Tiger’s latest game comes just days after this company was acquired by NetEnt. With that said, this release still counts as a full-blooded RTG title. The company has…

…made sure that players who decide to give this slot a spin can experience a few awesome features! As far as the theme goes, RTG went with a truly interesting setup. They have placed the well of whishes in the foreground, while the background features what appears to be a backdrop of 4-leaf clovers. The symbolism is hard to miss!

Although everything looks adequate, to say the least, there is a noticeable lack of distracting graphics. Instead, players are pointed straight at the reels where all of the magic takes place.

The entire theme has a semi-cartoonish look to it, which adds to the aesthetics. Once the reels start spinning, players will run into a variety of familiar symbols.

The developer went with the usual card royals for the lower-paying deck while the higher-paying deck features all of the items often associated with luck. Players will be handling horseshoes, rabbit paws and others.

The base game is rooted in the standard 5x3 grid with 10 fixed paylines. This is a high volatility game based on the supplier’s brand-new Core Engine that promises a max potential win that reaches 5000x the original bet.

As far as special features go, players can look forward to Lucky Coin and Lucky Spins, both of which add another layer of depth to an already engaging core game. The engine itself brings the most advanced slot game experience to the market.

The company takes pride in its new creation as it delivers a record high FPS with even the most graphically demanding titles in its catalog. RTG Core is compatible with a variety of devices, operating systems, and platforms, meaning that players can look forward to the same level of quality and entertainment no matter where they are. Lastly, Core improves this company’s already fast game integration abilities. Core architecture allows Red to customize, innovate and otherwise improve its content quickly and effortlessly.

The title will be available to all affiliated online casinos starting September 12th.

Red is an innovative software provider that was founded in 2014. It has made a name for itself by delivering engaging games that incorporate technologically challenging solutions. With an impressive portfolio of successful titles, the company quickly became one of the leading authorities in the industry. It became a part of the NetEnt group just days ago. The acquisition serves as a measurement of quality and success for a studio as young as RTG.