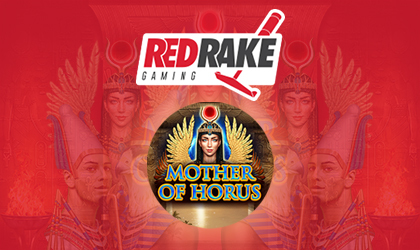 Taking one of the widely most popular topics for slots, ancient Egypt, Red Rake Gaming (RRG) popular content developer introduces Mother of Horus, a game packed with a diversity of features and visually appealing characters. Situated on a 3x5 grid, the release brings 50 winning lines filled with numerous prizes.

Developed in HTML5 technology, it ensures smooth experience across all types of devices- both desktop and portable. In addition to this, the game has a multi-lingual interface and supports a spectrum of currencies, which means it’s optimized for a wide range of clients across the globe. \

An Extensive Range of Dynamic Features:

The release is filled with versatile awarding options and symbols, which contributes to continuously challenging gameplay with plenty of action. The logo symbol…

…is in charge of granting rewards in the upper section of the game. The upper prize bar is the place where a punter can grab some of the many perks, including additional spins and Jackpots. The Isis icon can land on any of the reels.

There are also Nudge Wilds, which significantly boost the winnings with the moving Wild icon. Besides this, one can take a chance at the Destiny Roulette with Jackpots and scoop some major wins accommodated there.

Each of the symbols as well as the entire graphic…

…displays top-quality art, full of sophisticated details. The set of high-value symbols brings several themed characters and items, whereas the lower-paying ones are card deck icons of adequately matching design.

Not the First Trip to Egypt:

This topic is not only one of the most commonly exploited among the various studios, but this very studio developed more Egyptian-themed slots.

The Asp of Cleopatra and its five reels…

…brings interesting 3D visuals and 25 fixed paylines. Similar to the former, the title’s namesake is among the most important symbols of the game. Acting as a wild icon, she serves as the replacement for all the others and also appears as stacked.

Mysteries of Egypt brings an excellent opportunity to discover the pharaoh’s tomb and unveil the untold treasures. Packed with scatter, wild multiplier and extra spins, the game from the studio’s initial days gives a fine portrayal of ancient characters.

Entering the market in 2011, the talented team of 40+ experts has been devoted to developing innovative and modern casino games. Initially operating them in social casino…

…in 2015 the company decided to take the chance with real money casino operators. As a result, they started the path as B2B providers in 2016. Besides Egypt, the most commonly utilized subject is China, as it gives equally many spaces for creativity and exploring.