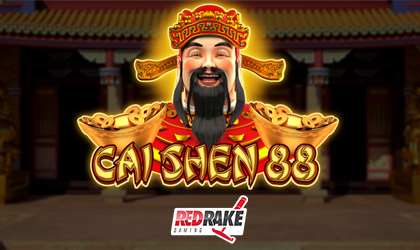 Red Rake Gaming has announced the release of a brand-new slot game titled, Cai Shen 88. Those familiar with the full array of Far Eastern themes…

…will most likely recognize this character as one of the regulars. However, this latest release from the developer offers yet another awesome take on this peculiar deity from Chinese Culture.

The God of Wealth and Fortune:

The supplier has been steadily releasing games this year. Not long ago, it broke the news of Mata Hari: The Spy hitting the shelves. As it turned out, the game was a pretty solid hit.

This latest release follows that same blueprint for success. The team behind this release has done their homework when it comes to Chinese traditional culture and their deities. RRG went above and beyond to represent this character in the best possible light and using the highest quality graphics that still fit into the overall theme. With a detailed background that depicts a temple or a shrine entrance, the game sets the mood.

As expected, everywhere players look they will see traditional Chinese elements. Despite all of the flashy colors often times associated with this era of Chinese history, this slot looks well put together in terms of aesthetics.

Underneath all of that shiny exterior hides a solid core game system. The developer went with a proven and highly polished 5x3 grid that runs on 25 fixed paylines. Symbols come in the form of the stylized card royals for the lower paying tier while the higher paying tier features golden animal statues as well as other forms of gold treasure.

When it comes to special features, there are several worth mentioning. Players will be treated with the Lucky Multipliers system. Drawing at least one scatter symbol in a win may trigger any of the available multipliers with x2 being the lowest, and x88 the highest.

On top of this, there is the Lucky Roulette feature. Drawing four 3 or more specialized symbols will trigger this mini-game where players will get a chance to win 4 different rewards. These combine bonus spins and multipliers, making this whole feature potentially lucrative if lady luck is on your side.

Red Rake is one of the more experienced companies operating in the iGaming market. It is a company that has made a name for itself as a top tier content provider that is always on the lookout to further the industry and relevant technologies. Founded back in 2011, it only entered the real money side of the industry in 2015.

Since then, they have achieved a number of great feats, including releasing games that were instant hits on the market. Considering the fierce competition and overall market saturation, this is a fairly significant feat even for a company of this caliber.