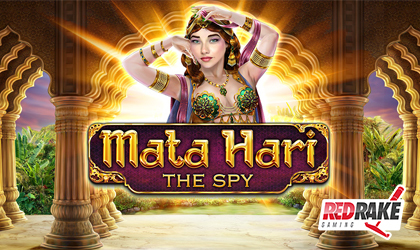 Red Rake Gaming (RRG) has announced the release of a new slot game that is inspired by one of the greatest spies in the history of the trade – Mata Hari herself. The game brings on the world of…

…espionage and more in a package that is both attractive and entertaining. On top of that, the developer went with an interesting base game mechanic.

The latest release from Red Rake Gaming offers an interesting take on what is arguably one of the greatest spies in history – Mata Hari. This famous dancer later convicted of espionage, has been the inspiration for numerous movies and shows. RRG has decided to offer a tribute of their own with this slot. The game takes place in what appears to be a garden behind a Hindu temple.

The background itself is static but rather detailed which gives it some depth. Indian ornaments are a dominant component of this game’s theme and are present in everything from buttons to symbol design.

Speaking of which, symbols come in the form of card royals as the lower paying set. The higher paying set of symbols features various characters involved in the main storyline as well as different types of jewelry.

Where the title really takes off is the base game design. It has completely departed from the standard reel pattern and gone with a 6x6 grid that runs on 80 fixed paylines. This makes the game attractive to those who appreciate unorthodox slots.

As far as special features go, there are several that need to be mentioned.

First up are the Raining Veils that include randomly triggered veils that drop over reels. This takes place during the base game. The symbols covered by the veils will double in value.

Next there’s the Spies Roulette that is activated when four Roulette symbols appear on the reels. Once triggered, this special feature brings up a roulette wheel with various multiplier values that players can win.

There is also the Mata Hari Eyes feature that randomly covers a number of symbols and turns them into wilds. Lastly, players will find a standard bonus spin mode.

Red Rake is one of the leading content providers in the iGaming industry. Specialized in creating high-end slot games, this software studio has achieved a sizable following in markets where they are active. Based in Spain and Malta, it operates in highly competitive regulated markets. The company has been creating online casino games since 2011.

However, it wasn’t until 2015 that they joined the real money side of the business. At the moment, it employs a team of 40+ talented and highly motivated professionals with decades of cumulative experience that drives the company forward. With a constantly growing portfolio of games, it is set to be among the more successful brands in short term.