Red Rake Gaming Releases the Magic in Time for the Holidays 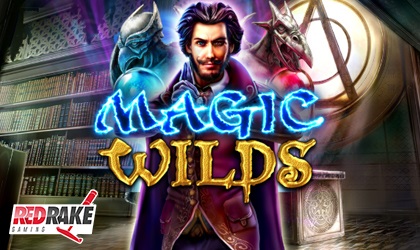 Spanish-based software developer, Red Rake has just unveiled the game that is a dream come true for every player due to the fact that it possesses every important element one video slot must have.

Tempting Features That Will Instantly Catch Your Attention:

Players who are into mystical and somewhat dark and spooky games will surely enjoy it. It talks about an omnipotent magician who utilizes his spells to blast-off various alluring features. This video slot is equipped with thirty-two pay lines that can be increased up to one-hundred pay lines and 5x4 reels that can go up to 5x8 reels!

What Can the Wizard Do With His Powers?

As mentioned previously, the powerful magician has the ability to trigger many fruitful features, including Astral Projection, the Magical Reels (that can reach up to eight lines during the extra bonus spins) and Scatters Hocus Pocus.

Besides these exquisite traits, this game excels in other fields, such as thorough design and enchanting soundtrack. Both of these elements create a great atmosphere that is going to quickly immerse any gambler into the story. Along with them, well-crafted and unique symbols also beautify the reels.

Probably, one of the best parts of this slot machine is the bonus spins that come with an interesting feature. During this round, the reels can randomly increase in lines and go up to eight!

Furthermore, the scatter along with another character can be seen on the fifth reel, which means that the gambler will get another extra spin.

This slot was created in HTML5, which enables its players to launch this game on both mobile phones and desktop.

Just recently, they have signed a dealership with one of the most popular sports betting operators, Interwetten. This agreement will help broadening the selection from the respectable developer from Spain.

On the other hand, Interwetten already has a great reputation and it is one of the leading operators in the gaming industry. They are widely known for delivering superb gaming experience to their customers.

Moreover, the entire collection of video slots, video poker and video bingo is going to be accessible to them, which automatically means that they will be able to offer their clients plethora of huge hits such as Super 7 Stars, Ryan O’Bryan and the Celtic Fairies and Maya.

“At Interwetten, we never stop working in order to offer our players the best possible experience. One fundamental element of our goal is being able to provide players with the best and most innovative casino games in the market. Red Rake Gaming’s content coincides perfectly with this strategy and we are delighted to begin working with them.”