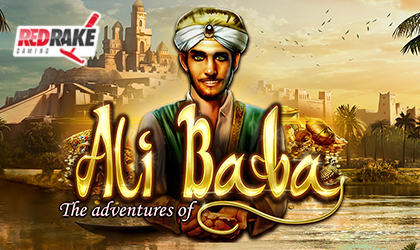 The tales of Ali Baba and his forty thieves has been inspiring all kinds of media for years now. First published in ‘One Thousand and One Nights’ by Antoine Galland, this story quickly became a pop culture classic. You’ve seen some of its influence in various cartoons and movies.

Red Rake Gaming’s latest release, titled, The Adventures of Ali Baba expands on that story in the form of a slot game. It is currently live for real money play and can be found on a number of popular casinos online.

One aspect of the game design where Red Rake is known to put its best foot forward, is the graphics. This studio’s core of graphical specialists is on point. This latest title is no different in this regard.

The game is packed with animations and theme-accurate elements, all of which form an intriguing atmosphere. The background and frame design feature many details. Everything from the smallest little buttons to character design is well executed, to say the least. As usual, the looks are not the only thing the supplier’s games have to offer.

At its core, the game features a 5x6 grid and a number of interesting base game mechanics. Namely, there are bonus features that involve 2x2 and 3x3 symbols among other things. If their previous slot games are anything to go by, this latest release will be a smooth ride from the start.

Immediately upon its release, the game went live on a number of online casino operators in various markets around the world. With that said, if you want to give it a go in a casual manner, you can check out the demo on their official website. There you’ll find other titles, like the controversial Bonnie and Clyde slot launched earlier this year.

The news of a new game comes at the heels of the recent partnership deal between Red Rake and Betclic. Some attribute this release to the supplier’s effort to expand their portfolio in lieu of their new, more aggressive business policy.

At the time being, this company is probing multiple markets through new partnerships, thus making their product available to a much larger user base. The Betclic alliance is one of two such deals the developer has signed in the past month; the other being a partnership with Novibet which should reinforce their presence in the UK and Greece.

Who is Red Rake?

This company has been operating in the world of online casino games since 2011. With a team of 40 or so talented individuals, the company has only recently entered the real money niche of the online casino games industry. In a short amount of time since then, this impressive team has built a large network of partners from markets all over the world.

As a result, their games are currently present and available just about anywhere. With that said, the supplier plans on increasing their presence in all markets where they currently operate, as well as establishing footholds in new places.

Red Rake Brings the Pack to the Reels in Wild Animals