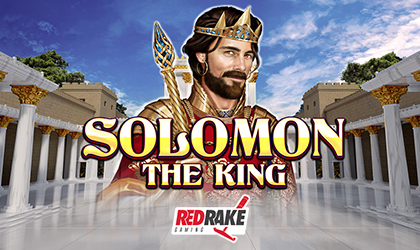 Red Rake Gaming has released a brand-new game that is promising to become one of their most feature-packed releases this year.

Titled Solomon The King, this new slot is combining both awesome graphics and mechanics that can potentially bring massive wins to players who are lucky enough.

The Palace of Solomon:

The developer has decided to take players on a trip through time, all the way to the age of Solomon – the ruler of the United Kingdom of Israel.

The game is dominated by awesome graphics and features that…

…are worthy of the title. The creative team behind this release has set the scene in ancient Jerusalem with massive temples and other structures surrounding the reels. The view is majestic and depicts marble and gold pillars up close, with lush greenery in the distance.

Reel and UI design goes a step further. Every frame, button and UI component depicts gems, gold, and other precious materials. Overall, this slot simply looks luxurious, which is to be expected since it is dedicated to a king.

As far as symbols go, the supplier did something interesting with the lower-paying set. They have used the standard card royals but designed them in a way to resemble Hebrew letters. The higher paying set depicts all kinds of treasures, including the arc of the covenant and other biblical artifacts.

Although stunning to look at, what truly sets this royal release apart from most games released so far this year are the core game mechanics. The game features a 6x10 grid that uses cascading wins.

In other words, winning combos…

…are paid left to right and can appear anywhere on the reels. As a result, there are 1 million ways to win and the max win amount is set at x20,000 the original bet. Special features are abundant. The game offers the standard bonus game mode, a progressive multiplier bonus spin mode, a Solomon mini-game where players combine smaller symbols to create larger, more valuable Solomon symbols and more.

Needless to say, the game is packed full of awesome features that can potentially change someone’s day for the better. The developer will offer this slot through its network of affiliated online casinos.

Red Rake is a software company specialized in producing high-quality slot games for the iGaming industry. With a team of over 40 talented professionals, RRG has been in the casino game business since 2011 when it was founded.

However, this company has only joined the money side of the business in 2016 when it began working with B2B clients. Today, it works on producing high-quality games that push the standards of the industry, as well as advanced promotional tools.