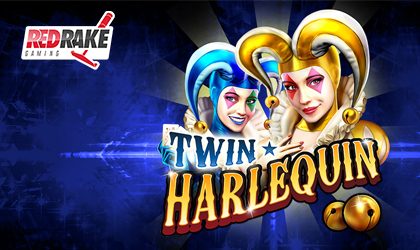 Red Rake Gaming (RRG), one of the top software providers in the iGaming industry, has just released an interesting new slot titled, Twin Harlequin. The game offers a unique take on special features…

…and packs plenty of potentially lucrative options for players. However, there is much more to this game than just special features.

The latest and greatest from the brand brings a great mix of innovative features and balanced visuals. The studio behind this slot game didn’t go all out when it comes to graphics and overall…

…theme design. Instead, they have focused on achieving more with less. The game features a simple theme that revolves around the main characters – the Twin Harlequins. Most of the background design comes in the form of dark, lightly textured print that is there to contrast everything that is happening on the reels.

One thing that does stand out is the symbol design. There are generally two tiers of symbols that overlap in this slot. Players will have the chance to experience the old school BARs, lucky sevens, cherries and bells, and harlequin symbols. Although it can be slightly confusing to figure out which symbol has more value, the game isn’t hard to get used to.

A New Dimension of Fun:

The new title is bound to attract the fans of classic slots thanks to its simple, old school theme. However, this is anything but a classic slot. On the contrary, it packs several innovative special features that give this game a whole new dimension. Leading up to these features, players will be treated with a rock-solid base game.

RRG has added a unique mini-game that can really make someone’s day under the right circumstances. Players lucky enough to chain 5 or more Respins and max out the…

…progress bar on the left-hand side of the reels will activate the Harlequin’s Roulette feature. One that happens, players are taken to a new screen where two Roulette wheels are lined up side by side with a single reel in the middle.

By spinning the middle reel, players can win the use of the left wheel, the right wheel or both. Each wheel brings different prizes. The left one is stacked with instant wins while the right one brings bonus spins.

Fans of the developer’s content can try this game out in any affiliated online casinos.

Red Rake is one of the premier slot game developers specializing in innovative games. The company has made a name for itself thanks to its ability to create engaging content that stands out compared to most of their direct competition.

Founded in 2011, it didn’t get involved in the real money side of the business until 2015. Despite creating online casino content for such a short period of time, the team of 40+ talented professionals has managed to prove their worth to the entire market.