Red Rake Brings the Pack to the Reels in Wild Animals 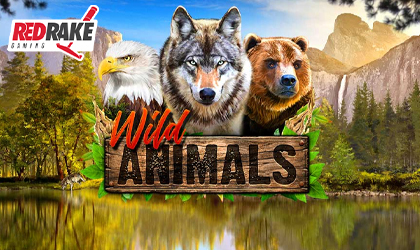 Red Rake Gaming is going back to the primitive with its latest slot game release.

Instead of going for a super modern theme, the supplier went with…

…a simple, primal one where they’re taking the player deep into the forests where loads of animals reside.

Running with the Pack:

The developer and popular software provider has taken shelter deep in the forest.

It has decided to pay homage to the wilderness and…

…bring the essence of the forests to the reels. The background offers a dose of tranquility with its depiction of the great American outback. Fans of the outdoors will feel at home in the woods that overlook a lake.

Symbol design makes the game complete in a sense that all of the symbols feature a wild animal in the higher paying tier. There are moose, wild cats, wolves and other animals – each represented in high detail to add to the immersion.

With that said, the lower paying set is represented by card royals that are styled to match the whole nature-oriented theme.

Wild Animals is a 5x3 slot game that runs on the 243 ways to win mechanic. Although fairly exciting on its own, the base game mechanic is made complete with several special features.

Aside from the Bonus Spin Mode and the Wild Fusion feature, players also have the standard Wilds to play with.

It seems that the supplier wanted to maintain the whole primal vibe that this title is bringing by not suffocating it with a bunch of features.

The way the game is right now offers a…

…great balance between interesting special options and a rock-solid base game.

Red Rake Gaming is a leading software provider operating within the iGaming industry. The company is all about bringing innovation to the reels and giving players new ways of scoring exciting wins. The team behind the brand is driven by innovation. With a diverse roster of industry professionals, the team is all about bringing challenging math models to the industry.

So far, they’ve managed to put together a solid portfolio of games that has become popular in the iGaming industry. Its content can be found all over the world, especially in the key regulated markets around Europe.